With the relentless advance of technology, the sound level meters of today are very different creatures to those of the 60s. Let’s delve into history and look at the trends that are shaping their future.

Starting in Times Square, New York, in the 1920s – a Fox Movietone News Story shows a technician from the Noise Abatement Commission making noise level measurements across the city in response to an increase in traffic. Armed with a receiver, a microphone, a phonograph and a wobbling test tone to measure “deafness produced by noise”, he concludes that “the noise in Times Square deprives us of 42% of our hearing” [sic]. It would be more than 30 years until the introduction of the first sound level meter standard. With the emergence of IEC 123, published in 1961, sound level meters had to be designed according to certain criteria to be approved and accredited – the era of commercially available sound level meters had begun!

You have to turn the clock back 50 years to see what we would recognize as a sound level meter today. Before then, noise measurements were made using heavy equipment based on valve technology. The engineer had to transport his equipment to the site and set up input and output attenuators before starting the measurement. Once the measurement was in progress, with no internal memory, levels would be recorded on a level recorder, with the engineer marking events on the paper roll. Post-processing software was non-existent and there were no alternative ways of displaying results.

Brüel & Kjær’s Precision Sound Level Meter Type 2203 launched in 1962 was, thanks to transistors, much smaller than its predecessors. Weighing in at just 5 kg with an octave filter set attached, it was arguably the first portable sound measurement device (although the level recorder did weigh another 25 kg). However, transistor technology of the day was not a precise science and not without issues. So great was the variation in resistance that transistor batches had to be sorted at the factory according to their quality before using them in production. Today, where everyday life is filled with smart miniature technology, Type 2203 doesn’t seem particularly small or light, but considering the technology available at the time, it was impressive. 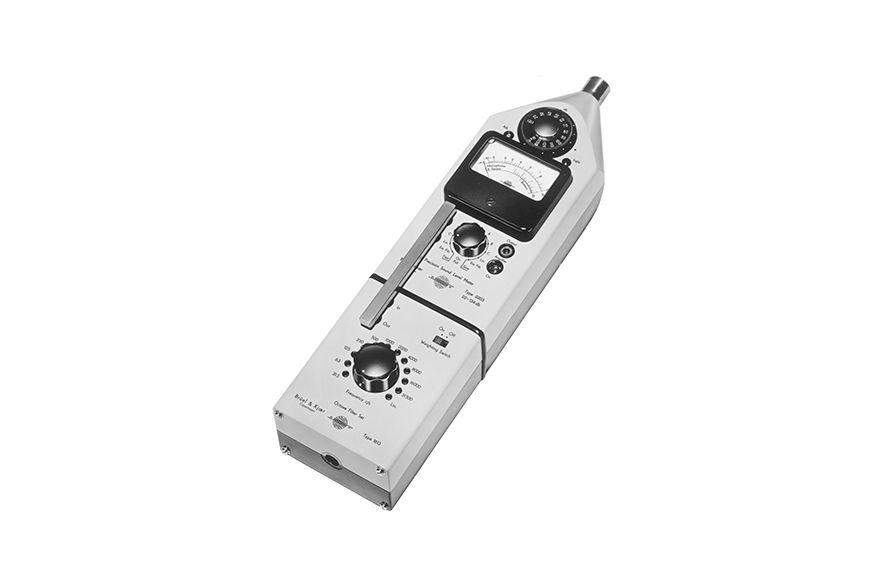 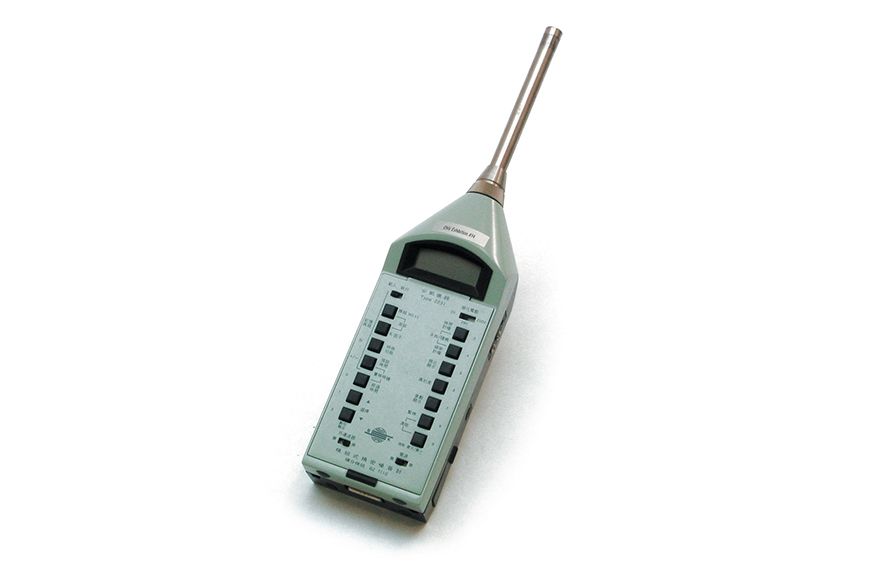 The 80s saw the end of large sound level meters. Driving this process was the emergence of microprocessors offering increased processing power due to integrated circuits that combined multiple transistors onto one chip, making parallel measurement of up to five independent parameters possible. The first Brüel & Kjær sound level meter to integrate a microprocessor was Modular Precision Sound Level Meter Type 2231. The choice of microprocessor was the cost-effective RCA 1802 – undoubtedly a good choice as it was also used in NASA’s space programmes.

Parallel to the development of microprocessors came internal memory (built-in data storage), allowing users to save their data on the sound level meter itself. This was around the time of the first electronic spreadsheets from VisiCalc, later Lotus Notes and Microsoft® Excel®. Using personal computers to make calculations was becoming more widespread.

By the late 80s and early 90s, the digital revolution was accelerating at a remarkable pace and had a huge impact on the future of sound level meters. 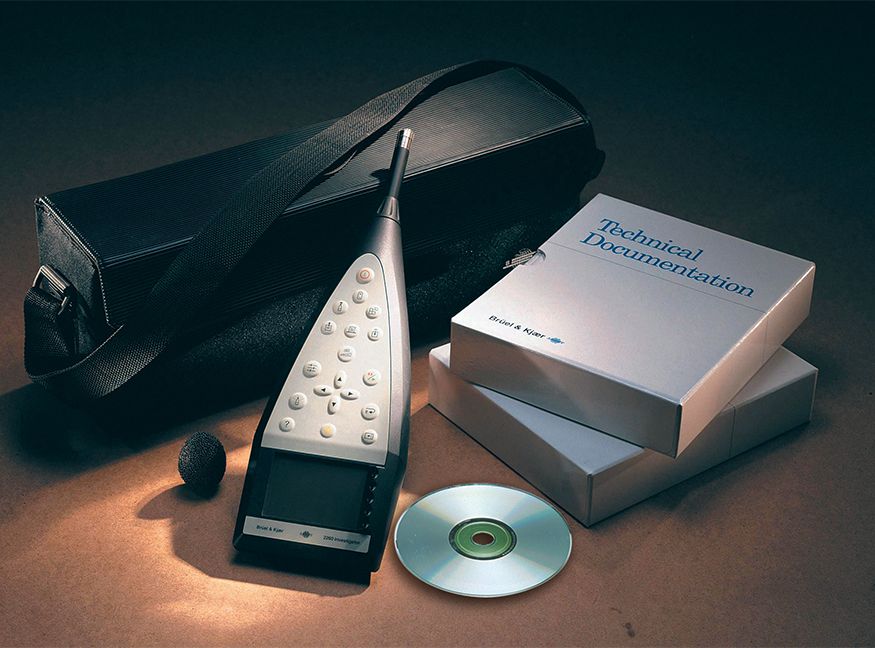 Connectivity shows the way to the future

Aside from large colour displays and advanced post-processing, connectivity is a central feature of 21st century sound level meters. Released in 2004, Brüel & Kjær’s Hand-held Analyzer Type 2250 shared many features with its technological cousin, the personal digital assistant (PDA). A colour and touch-sensitive display was a leap forward in usability, while USB and Ethernet interfaces offered flexible and convenient methods for connecting to a PC – be it in the same room, or on the other side of the world. Today, sound level meters Type 2250 and 2270 can even connect wirelessly to Wi-Fi networks, making remote control from a smartphone possible, along with cloud-based services for data storage and sharing. 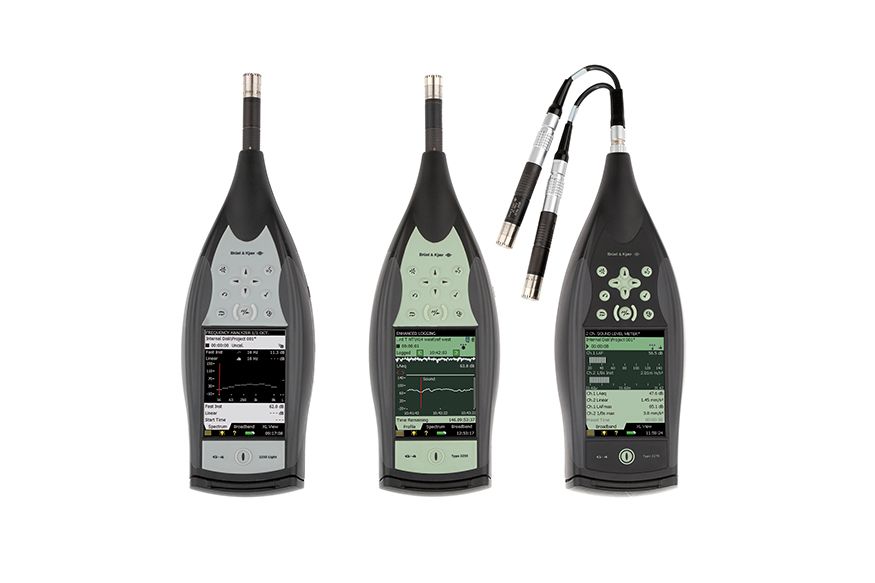 Today, smartphones are a constant presence in our lives. These pocketsized devices are much more than just phones – they are wireless communication devices combining microphones, cameras, speakers, accelerometers, gyroscopes and high-resolution touch-screens, with processing power rivalling the desktop computers of just a few years ago. They connect with an ever-growing range of devices and sensors, from heart rate monitors and pedometers, to seismographs and even sound level meters like Type 2250.

We’ve come quite a long way since the dapper measurement technician of Times Square in 1929, jotting down numbers in a notebook and working out hearing deprivation percentages, but with the evolution of the technology keeping pace with the importance of environmental noise, who knows what the future will bring?