Shock and drop testing of products, components and subsystems

To test how products, components and subsystems survive a drop, an induced shock or even a pyro shock, it is common to perform transient shock testing, drop testing and/or impact testing.

When conducting shock tests, payloads such as televisions, auto parts or white goods are moved rapidly for a short time period 100 g or 11 m/s, to simulate a car hitting a pothole or a television being dropped under transport.

Automotive OEMs, military and commercial manufacturers have standards for shock testing. These include SAE J1455 for shock and drop testing of vehicles and components, IEC 60068-2-27, IEC 60068-2-29 and IEC 60068-2-31 for classical shock, bump and fall of commercial products, and MIL-STD-810 for classical shock tests and shock response spectrum (SRS) analysis of military systems. The ability to store and reuse standardized test profiles via the controller software supports simple test execution. 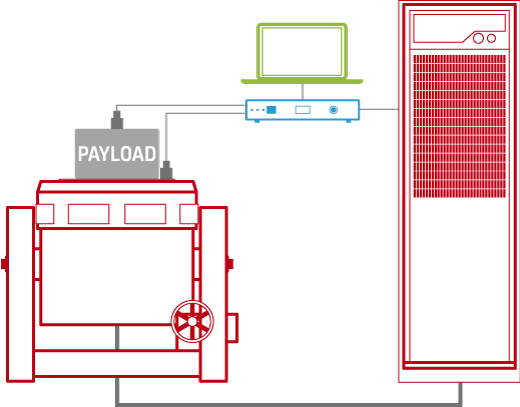 For shock testing, we suggest a system based on the V8 medium-force air-cooled shaker with industry-leading displacement of 63.5 mm (2.5 in) and a peak velocity of 1.8 m/s (70.9 in/s). The intuitive LASERUSB controller, whose shock test software offers fast and accurate recording and analysis of shock tests, controls this. For more advanced shock analysis, BK Connect Shock Response Analysis computes the SRS from transients in the time domain in order to determine the damage potential of transient events.