What is a sound level meter?

A sound level meter (SLM) is an instrument (commonly hand-held) that is designed to measure sound levels in a standardized way. It responds to sound in approximately the same way as the human ear and gives objective, reproducible measurements of sound pressure levels.

WHAT IS A SOUND LEVEL METER USED FOR?

Sound level meters are used to measure and manage noise from a variety of sources, including industrial plants, road and rail traffic and construction work. With the addition of typical urban situations, such as sports events, outdoor concerts, leisure parks and residential and commercial neighbours, you have many different sources of sound, each with different characteristics that pose specific problems for the professionals who assess them.

HOW DOES A SOUND LEVEL METER WORK?

A sound level meter comprises a microphone, a preamplifier, signal processing, and a display. The microphone converts the sound signal to an equivalent electrical signal. The most suitable type of microphone for sound level meters is the condenser microphone, which combines precision with stability and reliability. The electrical signal produced by the microphone is at a very low level, so it is made stronger by a preamplifier before it is processed by the main processor.
Signal processing includes applying frequency and time weightings to the signal as specified by international standards such as IEC 61672 – 1, to which sound level meters conform.

Time weighting specifies how the SLM reacts to changes in sound pressure. It is an exponential averaging of the fluctuating signal, providing an easy-to-read value. The analyzer applies Fast, Slow and Impulse (or ‘F’, ‘S’ and ‘I’) time weightings, which are the required weightings according to most international and national standards and guidelines. Environmental assessment standards usually specify which time weighting to use.

Assessing a fluctuating noise level means getting a value for a level that is, in simple terms, the average level. The ‘equivalent continuous sound level’, Leq, is known around the world as the essential averaged parameter. Leq is the level that, had it been a steady level during the measurement period, would represent the amount of energy present in the measured, fluctuating sound pressure level. It is a measure of the averaged energy in a varying sound level.

It is not a direct measure of annoyance, though extensive research has shown that Leq correlates well with annoyance.

Leq can be measured directly with most professional SLM’s (sometimes called an integrating sound level meter). If an A-weighting filter is used, it is expressed as LAeq, the measurement of the equivalent continuous sound level using the A-weighted filter network. 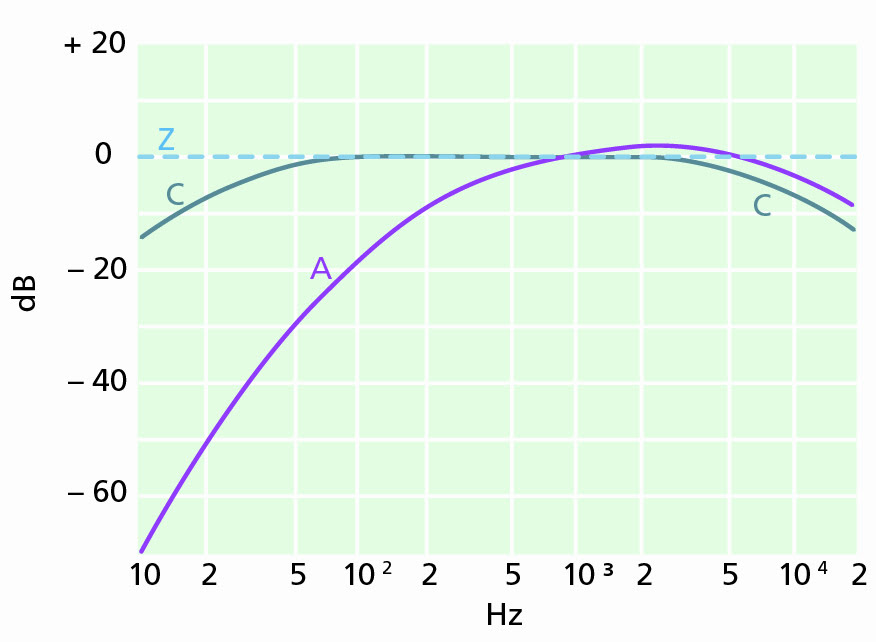 A-weighting adjusts a signal in a way that resembles the human ear’s response at medium-range levels. It is based on the 40 dB equal loudness curve. The symbols for the noise parameters often include the letter ‘A’ (for example, LAeq) to indicate that frequency weighting has been included in the measurement.

A-weighting is required for nearly all environmental and workplace noise measurements and is specified in international and national standards and guidelines. A-weighting filters cover the full audio range, 10 Hz to 20 kHz.

The response of the human ear varies with the sound level. C frequency weighting corresponds to the 100 dB equal loudness curve, that is to say, the human ear’s response at fairly high sound levels. C-weighting is mainly used when assessing peak values of high sound pressure levels. It can also be used, for example, for entertainment noise measurements, where the transmission of bass noise can be a problem.

Today, the A-weighting network is the most widely used frequency weighting. C-weighting does not correlate well with subjective tests because the equal loudness contours were based on experiments which used pure tones — and most common sounds are not pure tones, but very complex signals made up of many different tones. 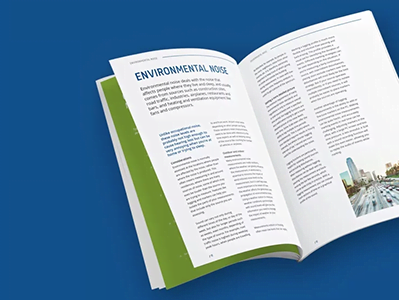 Things to consider before choosing your hand-held-device

When more detailed information about a complex sound is required, the frequency range from can be divided up into sections or bands. This is done with electronic or digital filters, which reject all sound with frequencies outside the selected band. These bands usually have a bandwidth of either one octave or a third of an octave.

The process of thus dividing a complex sound is termed frequency analysis and the results are presented on a chart called a spectrogram. After the signal has been weighted and/or divided into frequency bands, the resultant signal is amplified, and the Root Mean Square (RMS) value determined in an RMS detector. The RMS is a special kind of mathematical average value. It is of importance in sound measurements because the RMS value is directly related to the amount of energy in the sound being measured.

The display shows the sound level in decibels, typically with a descriptor showing the selected combination of time and frequency-weighting (eg; LAeq or LCpeak). The signal may also be available at output sockets, in either AC or DC form, for connection to external instruments such as a data acquisition system, to provide a record and/or for further processing.

Calibration is an adjustment of your SLM to measure and display correct values. The sensitivity of the transducer, as well as the response of the electronic circuitry, can vary slightly over time or could be affected by environmental conditions such as temperature and humidity. While you are unlikely to ever experience a large drift or change in sensitivity with the SLM, it is nevertheless, good practice to regularly check the calibration of your SLM, normally before and after each set of measurements. This is best done by placing a portable acoustic calibrator directly over the microphone. This will provide a precisely defined sound pressure level to which the sound level meter can be adjusted. In addition to checking calibration before and after measurements, many regulations and standards governing sound level measurements often also require that your SLM is calibrated in a laboratory once every 12 or 24 months.

International standards are important either because they are used directly or because they provide inspiration or reference for national standards. There are two main international bodies concerned with standardization. The International Organization for Standardization (ISO) deals primarily with methodology to ensure that procedures are defined to enable comparison of results. The International Electrotechnical Commission (IEC) deals with instrumentation to ensure that instruments are compatible and can be interchanged without major loss of accuracy or data.

ISO 1996 “Acoustics − Description and measurement of environmental noise” is a central standard within environmental noise assessment, acting as a reference work on the subject and commonly referred to by regional standards and regulations. It is divided into two parts:

It defines the basic terminology including the central Rating Level parameter and describes best practices for assessing environmental noise.