The green man – the next chapter

HATS Type 4128 was first released in 1986, but its origins go back a quarter of a century earlier when Per Brüel responded to a market need for better ways to evaluate hearing aid devices and participated in research related to artificial ears. This resulted in the development of Artificial Ear Type 4152. Roll on to the 1980s and the proliferation of personal stereos, initiated by the Sony Walkman, together with the emergence of the mobile phone concept, drove the need for a more holistic method of audio performance beyond the hearing aid market – a need to consider more than just a better representation of the human ear but also the influence of the head and torso.

The HATS concept can be traced back to work done by Knowles Electronics in the early 1970s in pursuit of improved hearing aid evaluation and resulting in the development of the KEMAR head and torso simulator. But while the concept evolved the science of audio product evaluation, it suffered from a lack of symmetry in left/right ear response and had no ‘mouth’ restricting the application in communication products. When considering the design for Type 4128, Brüel & Kjær engineers aimed at an average head geometry that could be defined in international standards while maintaining the accuracy and realism of human hearing. The style of today’s HATS reflects that. Type 4128 also included a version of the recently developed and standardized IEC 711 coupler which, for the first time, provided accurate acoustic impedance matching the human ear up to 8 kHz. 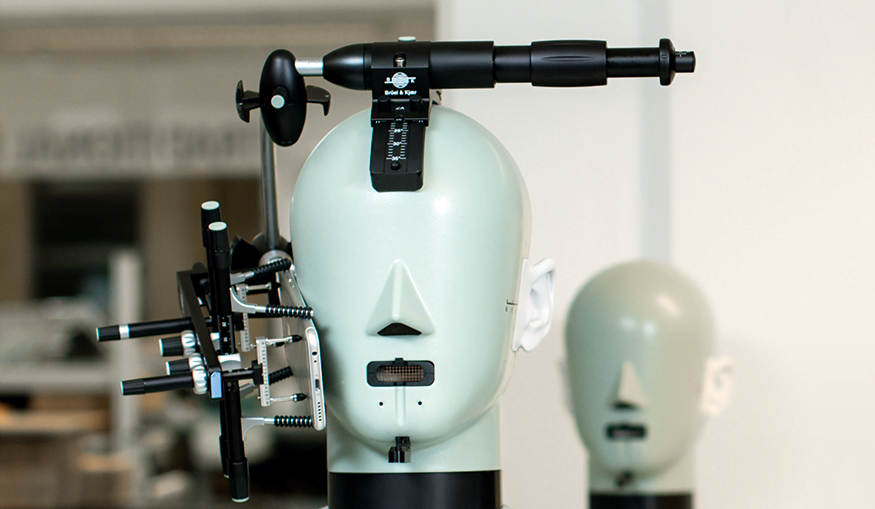 While there are several manufacturers of HATS, the one you’re most likely to notice is Brüel & Kjær’s Type 4128, often referred to as ‘the green man’ – not only because it sports the largest area of Brüel & Kjær’s ubiquitous green of any current product, but also because it is market leader in terms of numbers sold. The part of the design that couldn’t be simplified was the pinna – the part of the ear external to the head. The geometry of the pinna is crucial in obtaining the correct head-related transfer functions (HRTFs), which provide the coding of the directionality of the sound and must have a very precise geometry. In addition, the material had to be of the same relative stiffness as a human ear. Not an easy balance to achieve.

By the turn of the millennium, the digital audio age was already in full swing, transitioning from CD discs to MP3 players and then the Apple® iPod® revolution. The improvement in quality of source material and audio reproduction was continuous and the design limitations of Type 4128 were being challenged by these developments. Early in the new decade, Brüel & Kjær’s R&D team had been mapping out the research needed to expand the fidelity of a Type 4128 successor, but it was the launch of the Apple iPhone® in 2007 that added urgency to the need for a new product. The iPhone finally brought together mobile phone, entertainment system and personal computer into a single device, requiring new, integrated methods of measurement.

The maximum frequency limit of 8 kHz was fine for the previous generation of communication devices, which were limited to a bandwidth closer to 3 kHz, but incapable of accurately assessing the performance of devices that claimed playback up to 15 kHz or even 20 kHz. 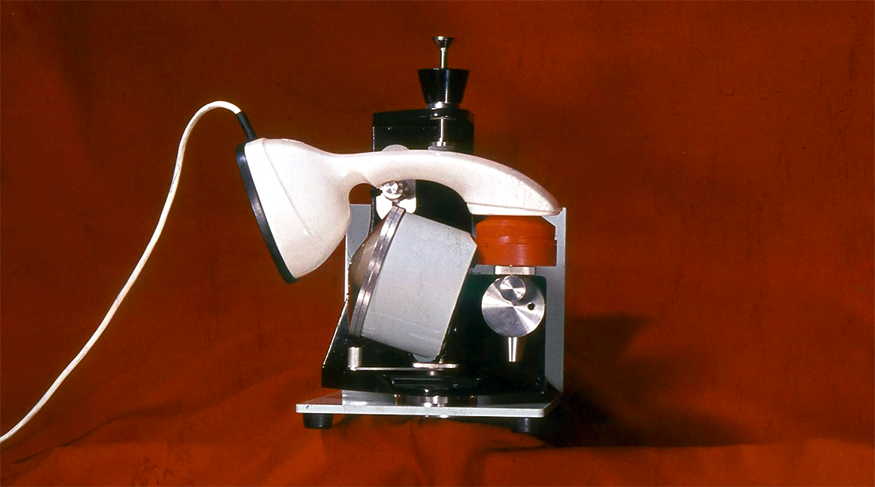 The key to successfully achieving the higher performance lay in better matching the acoustic impedance of the human ear. This meant a new coupler design, abandoning the simplified ear canal (a simple tube, 7.5 mm diameter by 8.4 mm long) and replacing it with an accurate geometric representation of a human ear. Brüel & Kjær engineers accurately measured the ear canal geometries of over forty people and then averaged the measurements to produce a target model. The correct geometry was, however, only part of the story as the materials comprising the walls of the ear canal had to be optimized for the correct and variable damping characteristics of the ear as it transitioned from soft pinna to the hard, bony structure towards the ear drum. Much numerical simulation of acoustic properties and many prototypes later, the new ear simulator achieved the goal of producing an accurate ear response measurement extending to 20 kHz and led to the birth of High-frequency HATS Type 5128 – a worthy successor to the original green man. 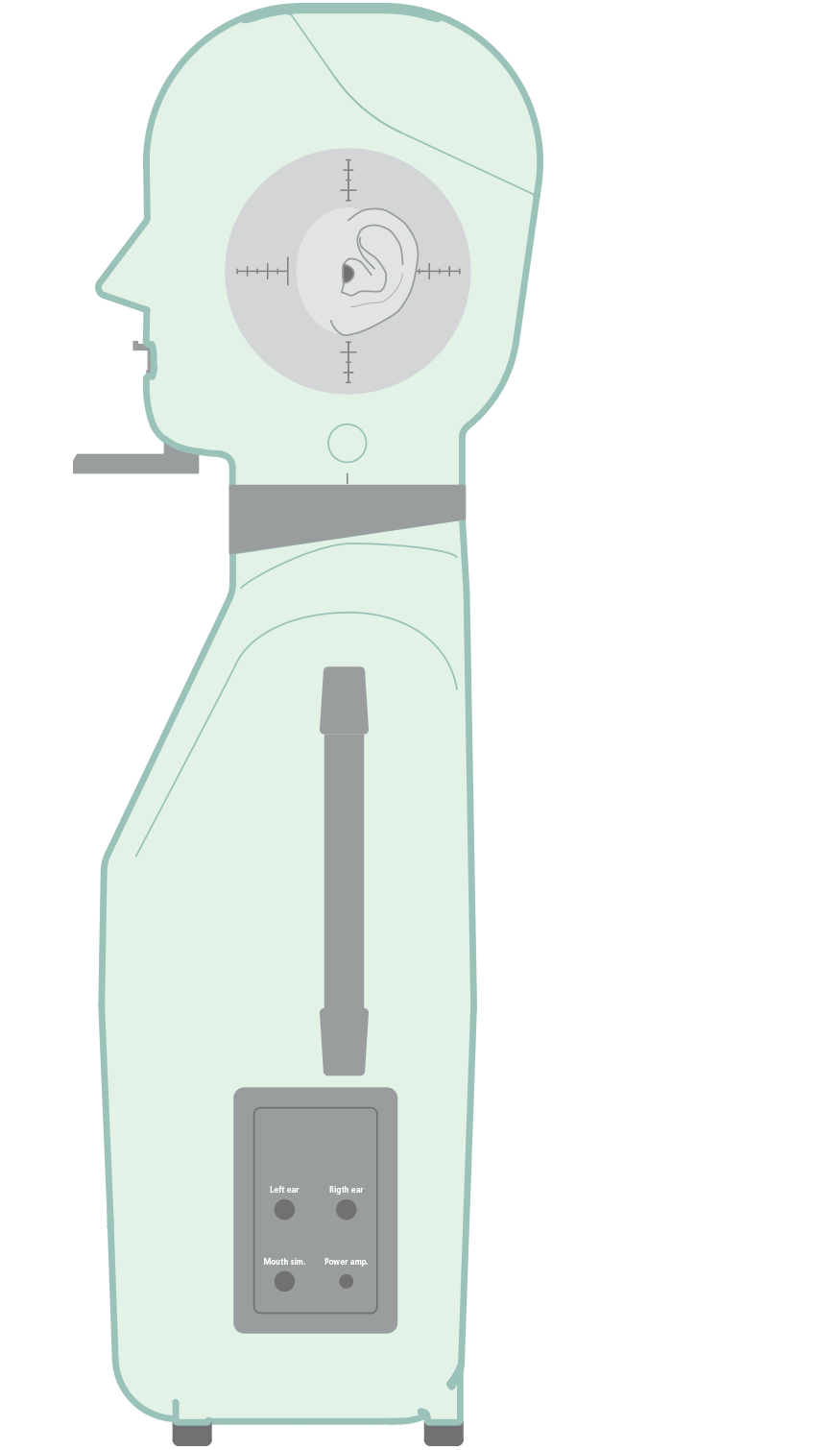