Fifteen kilometres west of Copenhagen lies the suburb of Albertslund, aka A-town. Its concrete mix of houses, shops and apartment blocks reveals its ‘60s origins, but the industrial exterior is deceptive as the grey buildings intermingle with small canals and lakes – making the town appear both tough and vulnerable.

But on this particular Saturday night, A-town’s theatre would be transformed into a true arena. Team Sauerland’s Nordic Fight Night was in town and at centre stage, one of Albertlund’s own. The 22-year-old local boy and undefeated WBA & WBO Intercontinental Middleweight Champion Patrick Nielsen would be defending his title against Mexican José Pinzón and fighting in his own backyard for the first time in his career. The scene was well and truly set for The Homecoming.

“We’ll have everything we need to get our names in the record books – a great venue, a crazy crowd and fantastic fights.”
Nisse Sauerland - Promoter

The warrior returns
Team Sauerland is Europe’s leading boxing stable and, together with Viasat, came up with the Nordic Fight Night concept in 2012. The idea is not only to boost Scandinavian boxing but also to provide fans with an opportunity to experience world-class boxing at different venues around the country and live on TV. Tonight it was Albertslund’s turn to be in the spotlight, and Patrick Nielsen, having returned home from Berlin to fight in front of friends, family and fiercely loyal and boisterous fans, was not going to disappoint. And with Patrick’s younger brother, Mikki Nielsen, also in action in the ring, a lively evening was in store. And if that wasn’t enough drama, Team Sauerland decided to up the ante even further and pit the 1200 rowdy Patrick Nielsen fans against 17,000 followers of the Sacramento Kings basketball team in an attempt to break the Guinness World Record for loudest crowd roar at a stadium (indoors). The current record of 106.6 dB(A) had remained unbeaten for almost five years and was claimed during a second time-out in the third quarter of the LA Clippers v Milwaukee Bucks game at Bradley Centre, Milwaukee, Wisconsin, USA, on 20 December 2008.

“We’ll have everything we need to get our names in the record books – a great venue, a crazy crowd and fantastic fights.” Nisse Sauerland, Promoter

When two tribes go to war
The two challenges for the record, both officially accepted by Guinness World Records, would take place within 24 hours of each other. Promoter Nisse Sauerland was confident, “We’ll have everything we need to get our names in the record books – a great venue, a crazy crowd and fantastic fights. The atmosphere will be sensational on Saturday.” Patrick Nielsen added, “I am so grateful for the support I get from my fans, it would be great to break the record together. When I hear their screams and shouts, I know that I am not alone in the ring and that gives me a big energy boost. I will do my part and give the crowd an exciting fight. Let’s make some noise.” The gauntlet was well and truly thrown down. Denmark and America were going head-to-head. 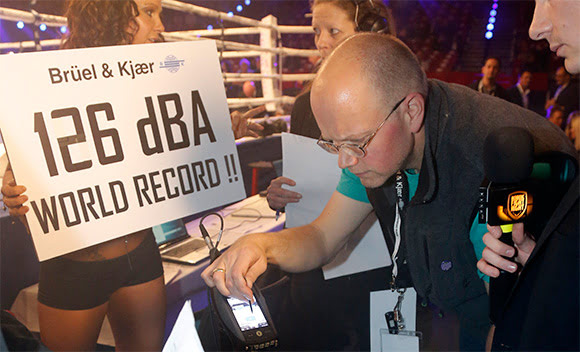 “When I hear their screams and shouts, I know that I am not alone in the ring and that gives me a big energy boost.”
Patrick Nielsen - Intercontinental Middleweight Champion

Sticking to the rules
Having looked at the official Guinness World Record guidelines, Johannes Berendt, Head of PR, Sauerland Promotion, contacted Brüel & Kjær for some technical help with the noise measurement. The rules were clear: 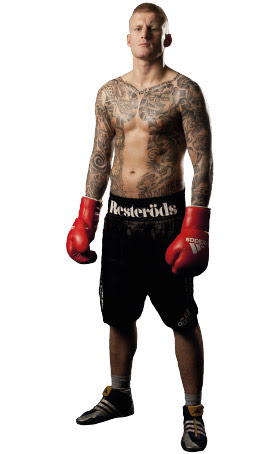 After perusing the guidelines carefully, Brüel & Kjær Product Manager Instrumentation Brian MacMillan, was not worried. “Besides a little confusion about peak and maximum, the guidelines were similar to what our consultants in local governments and consultancies work to,” he said. In Brian’s opinion, the biggest challenge was needing to be 2.5 metres away from the closest participant. But that didn’t faze him for long, “It just meant that effectively the microphone needed to be inside the ring.” Simple as that. 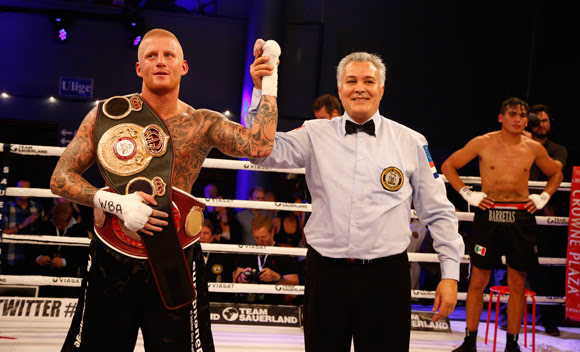 Taking it on the chin
However, the first blow on Saturday was not delivered by one of the fighters. It came from the other side of the world – the world record for loudest crowd roar at an indoor sports event had been broken and confirmed on Friday night, just one day before the Danish attempt. The fans of the Sacramento Kings (USA) had roared their way into the record books achieving a mighty 126 dB(A) at Sleep Train Arena, Sacramento, California. It was going to be tougher than originally thought.“May the loudest fans win,” said promoter Nisse Sauerland, “and even if we can’t break the record, we will still scare the hell out of our boxers’ opponents.” Patrick Nielsen added, “The atmosphere will be amazing. My fans will take the roof off.”
The setup was quite simple – a microphone placed on a tripod in the middle of the ring was connected to Sound Level Meter Type 2270. The planned three attempts at breaking the brand-new record were all transmitted live on TV to an audience of 132,000 Danes. The old record of 106.6 dB(A) was easily broken on the first attempt – the Albertslund crowd achieving 114.5 dB(A). The two final attempts managed a respectable 115.5 dB(A) – not a world record maybe, but a European one nonetheless.

“When I hear their screams and shouts, I know that I am not alone in the ring and that gives me a big energy boost.” Patrick Nielsen, Intercontinental Middleweight Champion

More importantly, the hometown boys were triumphant. Micki Nielsen made short work of his German opponent Björn Blaschke with a knockout in the first round, and a lightning left hook by Patrick resulted in a technical knockout in the fifth round and a convincing victory. Patrick Nielsen remains unbeaten – it was a good homecoming. 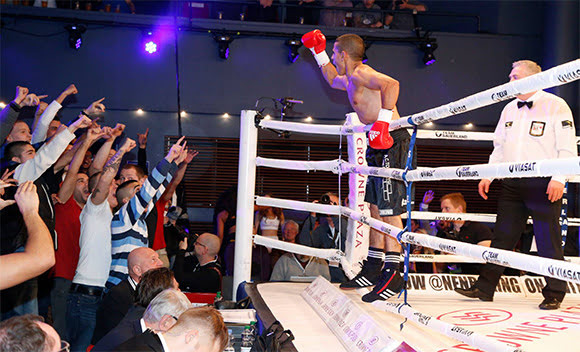 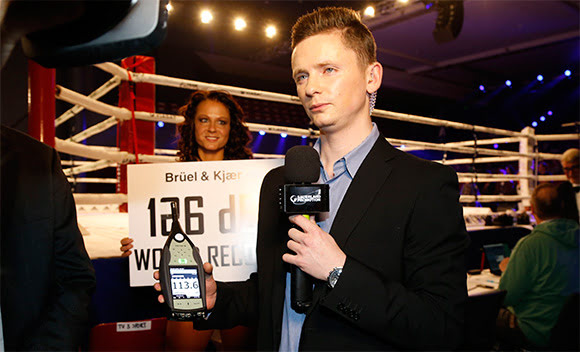