A division of Grace Engineering, G5 Outdoors is a small family-owned company in the US state of Michigan’s ‘thumb’ area. They have been making hunting products for years, beginning with all-steel broadheads (arrowheads), but they’re new to making bows. With the aim of building on their reputation as the technical expert supplier for bowhunters, G5 needed help to fine-tune a quiet, shock-free bow. “We definitely needed the setup offered by Brüel & Kjær at the Application Research Center (ARC) testing lab,” says Dave Hawkey, Marketing Manager for G5 Outdoors. “Naturally, we don’t have noise and vibration experience, and testing outdoors wouldn’t have given us the results we needed. The ARC gave us a world-class lab and the technical expertise we needed, both in terms of general acoustic knowledge and operation of data acquisition equipment.”

A one-of-a-kind facility
Fortunately for G5, the ARC lab was located nearby, just outside Detroit, Michigan, and houses a one-of-a-kind noise and vibration solution facility with a wide array of state-of-the-art NVH testing capabilities, as well as advanced computer simulation and materials development and testing capabilities. It was founded by three companies – Brüel & Kjær, Material Sciences Corporation (MSC), and Link Engineering. MSC launched their Quiet Steel® damping material in 2001 and needed a facility to test it and demonstrate its value to customers. In 2003, MSC approached several suppliers of noise and vibration test equipment and decided to enter into a partnership with Brüel & Kjær and Link Engineering to help build, staff, and equip the ARC. The facility was completed and commissioned in June 2006. All of the test equipment at the ARC – including transducers, shakers, front-ends, PULSE measurement systems, and NVH test/analysis software – is supplied by Brüel & Kjær. 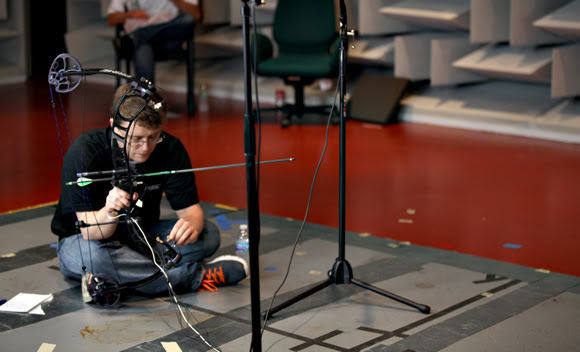 A day’s worth of valuable data
“We accomplished the testing for G5 Outdoors in one day,” says Andrea Frey, Project Engineer for Brüel & Kjær North America, “but it was a long day, about 13 hours. It could have been split into two days, but G5 is located 90 minutes from the ARC, and we didn’t want G5 driving two days in a row. The work itself was not complicated. We did the testing in one of the ARC’s hemi-anechoic chambers, with the target at one end and the shooter at the other. G5 brought several bows to the ARC, with the goal of capturing the vibration of their bows and a few competitors’ bows, so we instrumented each bow with triaxes [triaxial accelerometers] at several locations.

“There is also apparently a phenomenon during deer hunting where the deer could possibly ‘jump the string’ after you release the arrow, and there’s some speculation that it might be because they can hear the bow. So we set up microphones on either side of the shooter and also right by the target. We used our Reflex post-processing software to separate the sound of the bow’s vibration when the arrow is released from the sound of it hitting the target. The goal was to see if the release sound was in a deer’s range of hearing – it was.”

“When it becomes time to do some more investigative design work, we’ll have everything G5 needs for that too. The ARC is ‘one-stop shopping’ for them.” Andrea Frey

A bonus to the long day’s testing was that it provided an ideal high-tech environment for video and still photos that G5 plans to use in their marketing materials.

A perfect match
“I think the ARC was a perfect match for G5,” says Andrea Frey. “Other companies in our area have hemi-anechoic rooms but we are one of the few independent companies. We use it strictly for third-party work as opposed to development of some product of our own. Unlike our competitors, who offer limited facilities and expertise, we have access to Brüel & Kjær’s full suite of equipment. We didn’t have to move accels [accelerometers] around on each bow to get vibration in each location. We weren’t limited by channel count."

"When it becomes time to do some more investigative design work, we’ll have everything G5 needs for that, too. The ARC is ‘one-stop shopping’ for them.”​

G5 Outdoors joins a growing list of companies worldwide that have taken advantage of the ARC laboratories to perform a wide range of sound and vibration testing. Many do not have their own test facilities, or are using their own facilities for other work. One example is a Japanese Tier 1 automotive supplier, an industry leader for precision motors that develops more custom assemblies than any competitor in North America. To test production parts they shipped hundreds of parts to the ARC and set up camp in the fully anechoic chamber for several weeks. The ARC also helped one of the world’s largest manufacturers of professional hand and power tools to ensure that their products do not produce unacceptable amounts of vibration that could harm the user. Noise and vibration testing is a crucial but only occasional need for that company, so buying equipment and training their personnel doesn’t make sense. Taking advantage of Brüel & Kjær’s engineering services at the ARC is a perfect solution. 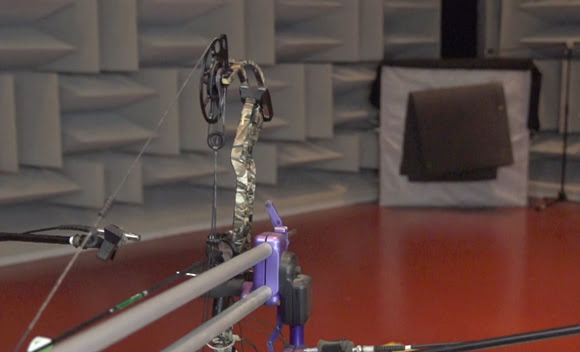 As these examples suggest, the ARC’s ability to provide ‘one-stop shopping’ for a very broad range of testing needs is fundamental to Brüel & Kjær’s commitment to providing full noise and vibration solutions – and the result of a service philosophy that acknowledges that customers are sometimes better served by consulting services than by equipment purchase. 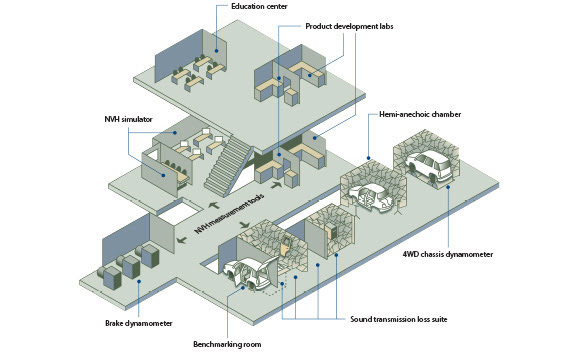