Diving deeper into the sound of blue whales

Growing up to 30 m long and 180 tons, the blue whale is the largest animal in the world. In addition to its impressive size, its calls can be heard thousands of kilometres away and far below the ocean’s surface. However, very little is known about these calls and how man-made noises can interfere with them – and what the implications really are. Project Blue Whale was created to dive deeper into these issues.

Thanks to the efforts of Dr Marianne Helene Rasmussen and her team, we are now beginning to understand more about how, why and when these majestic animals communicate and what we can do to help them survive and prosper.

Blue whales communicate using the lowest frequency sound recorded among cetaceans with loud, low-pitched moans and whines that can be heard over very large distances. These ‘down-sweep’ calls have frequencies from 107 Hz to 21 Hz (or lower) and show an incredible variety with eleven different types of sound.
Unfortunately, this is the same frequency range as a wide variety of man-made sounds, such as ship engines, low-frequency active sonar, seismic air gun array explorations and other oil exploration activities, to name but a few.

The question is, what effect does this noise pollution really have on these highly intelligent animals? 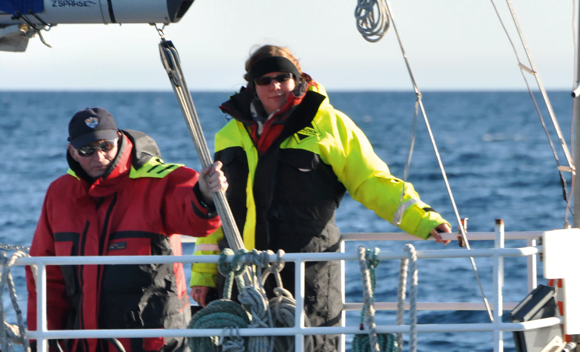 A loud and serious threat

Because of the widespread nature of anthropogenic activities (ie. shipping noise) masking may be one of the most extensive and significant effects on the acoustic communication of marine organisms today.

Masking has the greatest impact on animals when the noise is at frequencies similar to those of biologically important signals.
(Sources: www.dosits.org, www.cbd.int, Slabbekoorn et al. (Trends in Ecology and Evolution, June 2010). 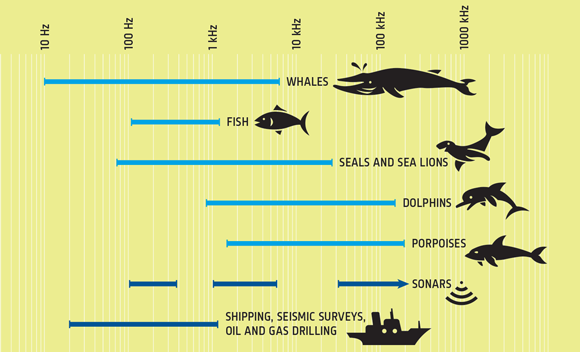 This issue was duly noted by the Húsavík Research Centre at the University of Iceland, a leading authority in the study of marine mammals. The centre is led by Dr Marianne Helene Rasmussen, who is the driving force behind ‘Project Blue Whale’ – a research initiative to get baseline data on ambient noise levels, the communication of blue whales and to study the effect that masking this low-frequency sound has on them. 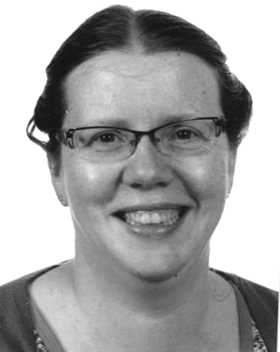 As the director of the Húsavík Research Centre at University of Iceland, a leading centre of excellence for marine biology and the study of marine mammals, Dr Marianne Helene Rasmussen knows a thing or two about whales.

Marianne started her marine mammal studies in Iceland for her Masters project before completing a PhD on the acoustic communication in white-beaked dolphins at University of Southern Denmark in 2004. Since then, she has been involved in research projects worldwide that have revealed ground-breaking insights into the nature of humpback whales, blue whales, minke whales, killer whales, narwhals, and porpoises.

Instead, they were happy to support Dr Rasmussen’s efforts, as she could provide the same or better results in Iceland at far less cost.

The objectives for Project Blue Whale fell into two parts. Firstly, the project aimed to gain a better understanding of the blue whales communication patterns. This would require the localization of individual blue whales and the recording of what sounds they were making at what times. 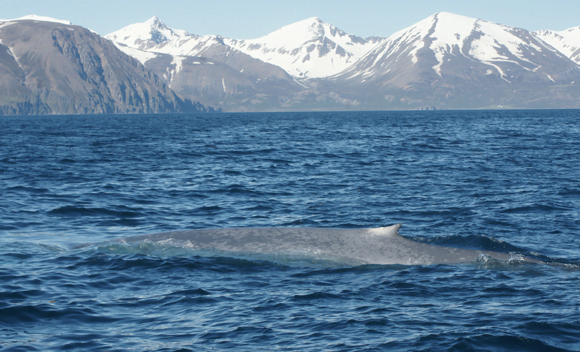 This would help to answer key questions such as whether it was always the same animal calling, what the difference is between animals and whether they are able to change the frequency of their calls to account for background noise (something other species of whales are able to do).

The right time, the right tools

Such an endeavour required a large amount of planning. Dr Rasmussen chose Skjálfandy Bay in Northeast Iceland as the best area to conduct the research; it is easy to get to, close to shore and Iceland’s round-the-clock daylight meant that the research team could go out very early in the morning, long before the whale-watching boats started up their engines. 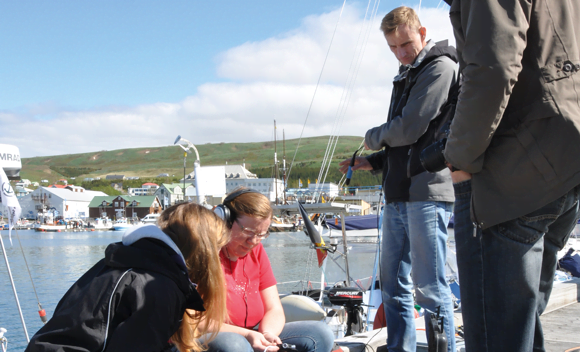 There is also only a very small four-week window in June when blue whales are typically sighted in the bay (if at all). Blue whales move at their own pace and you can never predict when they will appear or for how long. As such, a two and a half week period was carefully chosen to make best use of this limited timeframe.

Fortunately, Dr Rasmussen has broad experience in marine research using hydrophone arrays to record beam patterns and sound levels, so she was well prepared for the technicalities involved. In 2000, she had been part of a similar project in Andenes in Northern Norway that recorded the sounds made by sperm whales using Type 8101 hydrophones from Brüel & Kjær. 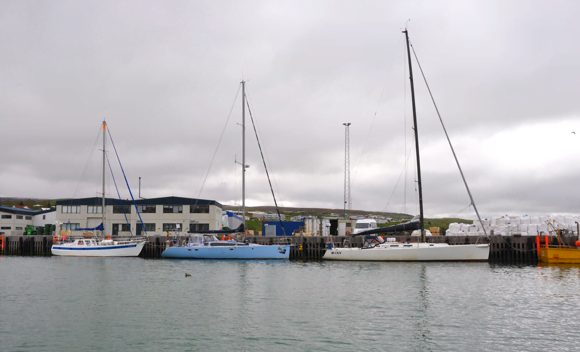 With everything ready in good time, 4 boats and 28 people set out at midnight on 19 June, 2015 to begin the first recording. The team included Dr Rasmussen, who was leading the project, and other specialists from the University of Southern Denmark, Odense University in Denmark, University of Veterinary Medicine Hannover, as well as some PhD and Masters students, whale-watcher crews and boat crews.

To get accurate recordings, the team needed calm seas and no wind; otherwise the subsequent waves and ‘cable strumming’ noise from the hydrophone cables would cause additional noise interference that would render the results useless. 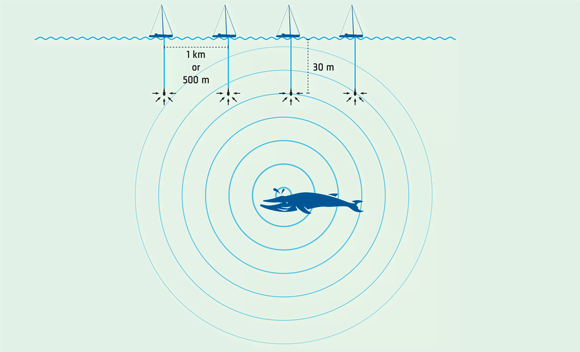 Blue whales communicate via low frequencies (for a 15 Hz signal the wavelength is around 100 m) so a
special method was also needed to locate exactly where the whales were.

This was achieved using all four boats 500 m or 1 km apart in a line, with the hydrophones at a depth of 30 m. Then, once a whale was sighted, all that was needed was for the boats to stay in place and record the whale sounds and locations for approximately one hour at a time.

Aside from a few days of bad weather and some minor technical glitches, everything went as planned and the team managed to gather over 100 whale calls and a wealth of good positional data. Now, all that is left for this part of the project is to analyse the recordings, which is done on shore and will be completed within the next six months.

Of course, the project doesn’t end there and the second part – examining how ship noises mask and affect the whales’ communication – is still to be done. Nevertheless, the data so far has already revealed some interesting results about the nature of these fascinating sea mammals, how they communicate, what frequencies they use, why and when.

Hydrophone Type 8106 has a built-in amplifier which gives a signal suitable for transmission over long cables. It is usable down to 1000 m ocean depth. 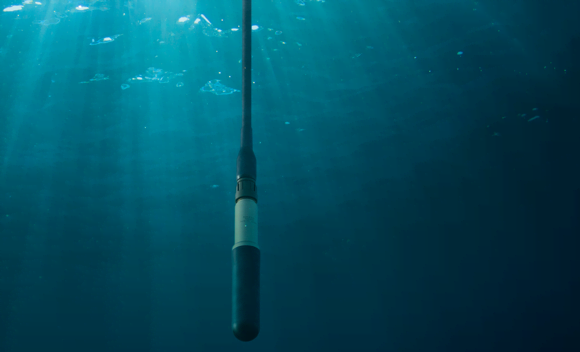 Never one to sit still, Dr Rasmussen is already planning to apply for financial backing for a range of other projects next year to look more closely into these and other areas.

For a project like this to have gone so smoothly so far, with so many extraneous variables to manage and overcome, is a huge achievement. Now, thanks to Dr Rasmussen and her tireless team, we are not only forming a far deeper understanding of blue whales, but hopefully these results will be a catalyst for new dialogue with authorities about shipping lane regulations and what more we can do to safeguard the whales’ natural habitat.

And if all this leads to more and better ways of protecting this enormous, endangered and enigmatic sea creature, then this is the best possible result for us all.

Listen to the blue whale:

The Brüel & Kjær NOTAR recorder allows underwater sound recording for hours at a time – even without the need of a laptop. NOTAR is a small and rugged solid state recorder that has no shock-sensitive moving parts (unlike tape recorders or PC hard drives) which means it can be used in locations where no PC-based recorder can operate. 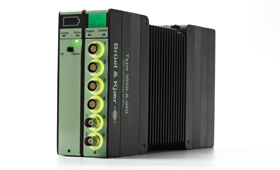