The new pass-by tests coming in 2016 will help prevent ‘noisy’ vehicles from being able to satisfy legal sound limits in very specific test conditions – by broadening the scope of the tests.

Why do we need new test procedures?
To minimize the ever-present noise from cars and motorbikes in urban areas, manufacturers must ensure vehicles stay below pass-by noise levels. However, despite sound level limits having been reduced in the EU a number of times, European governments became concerned that limits were not translating into reduced urban traffic noise. One reason was thought to be that the pass-by noise test procedure was not accurately reflecting real-world urban driving.

What was wrong with the old tests?
Test procedures define precisely how to drive and measure a vehicle while measuring sound – a wide-open throttle acceleration from 50 km/h, (ISO 362:2014). However, manufacturers have learnt to tune vehicles to keep noise below the legal limits during these tests, by installing devices or carefully mapping the engine control management system for that specific manoeuvre. But at other times during normal urban driving, the vehicle may still be perceptibly noisy.

What do the Additional Sound Emission Provisions do?
The new type-approval procedures ensure the manufacturer also demonstrates that the vehicle’s sound levels do not significantly differ from the ISO pass-by test result under typical on-road driving conditions, at a broader range of speeds. 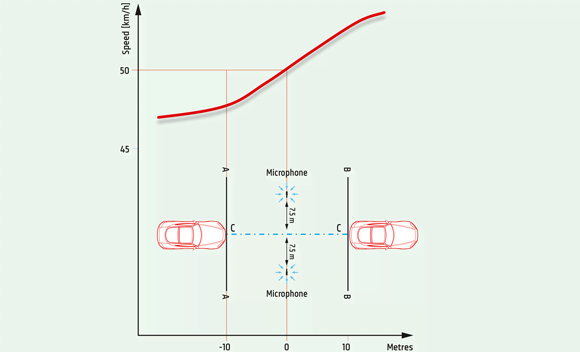 The ISO 362:2014 method specifies 50 km/h at the microphone, to which the ASEP regulations add four additional speeds for every gear ratio – 24 tests for a 6-speed car.

What challenges do they present for testers?
Precise speed requirements at entry, mid-point and exit past the microphones (a 20-metre track section) all require precise driving, and take several runs to achieve. This takes valuable test-track time. Test equipment needs to be easy to use on many consecutive runs, and with highly visible speed displays.

What does it take to achieve a pass/fail result?
During and after testing, there are many more calculations to perform than before. The ‘A’ in ASEP stands for ‘additional’, meaning they exist alongside the pre-2016 regulations. The ASEP results must be combined with the results from ISO 362:2014, and the only way is manually, such as by using a spreadsheet. However, solutions that build ASEP calculations into the pass-by testing software are under development, and will be released in early 2016.

Where and when will ASEP be required?
They will be required on all new vehicle types (such as minor model changes) in Europe from July 2016.

Where can people find out more?
In the UN Regulation No. 51, published by the United Nations Economic Commission for Europe. Or ask one of our experts!