Working together for the greater quiet

Cummins is a global power leader that designs, manufactures and markets diesel and natural gas-powered engines for on- and off-highway use. Beyond keeping up with regulations and customer expectations that become more and more refined every year, Cummins wants to stay ahead of future requirements and expectations, as well. Frank Eberhardt is an NVH Technical Specialist at Cummins Inc. who specializes in diesel engine noise and vibration measurement, including noise source identification using near-field acoustic holography (NAH) and beamforming tools. His mandate within the research and development department is to develop tools and processes that will result in quieter engines. And toward that end, Cum-mins is interested in exploring the latest aspects of source visualization technology. 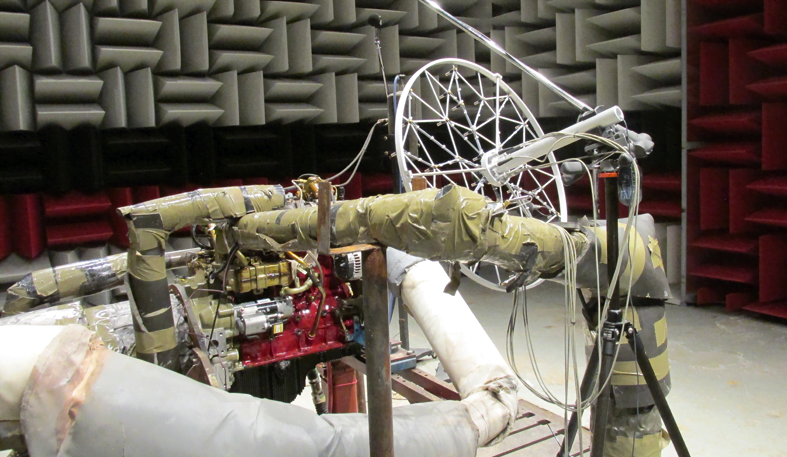 Purdue is a highly respected research university with a prestigious history of partnering with companies for the furtherance of education for their graduate programs and to allow experts to push the boundaries of their various fields. One of those experts, Dr J. Stuart Bolton, is a professor of mechanical engineering at Purdue University with 30 years of experience with holography and has research focus areas in acoustics and sound field visualization. He first became acquainted with Brüel & Kjær’s holography system in 1985, when Jørgen Hald and Bernard Ginn brought the first Spatial Transformation of Sound Fields (STSF) system to Purdue for a demonstration.

Cummins’ quest
In their quest for ever-quieter engines, Cummins faces a host of challenges that need to be taken into account and overcome. For example, not only is the front of a diesel engine already a minefield of potential noise sources, there are new contributions resulting from increased demands placed on components to meet emissions regulations. According to Frank Eberhardt, an increasingly prevalent noise contributor is “the ever increasing demand for reduced emissions, which puts more demands on the engine and fuel system where cylinder pressures and fuel systems pressures are always rising to accommodate these requirements. Higher system pressures do not bode well for engine NVH.” This requires newer and better noise identification methods and technology. 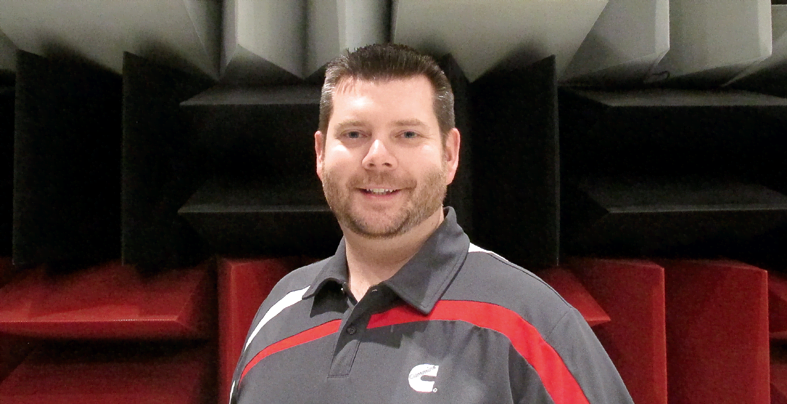 And because of the way that noise sources may interact with each other, some sources won’t be noticeable until they are past the design phase and already assembled as part of the engine. For example, higher fuel system pressures could induce gear rattle or an increase in peak cylinder pressures could manifest as combustion noise at specific component locations. So a problem also arises if the experimental, design and analysis teams aren’t using the same tools. If a problem is found that has its root cause from another development stage, that problem must be ‘translated’ to data that can be used to find the source of the problem. 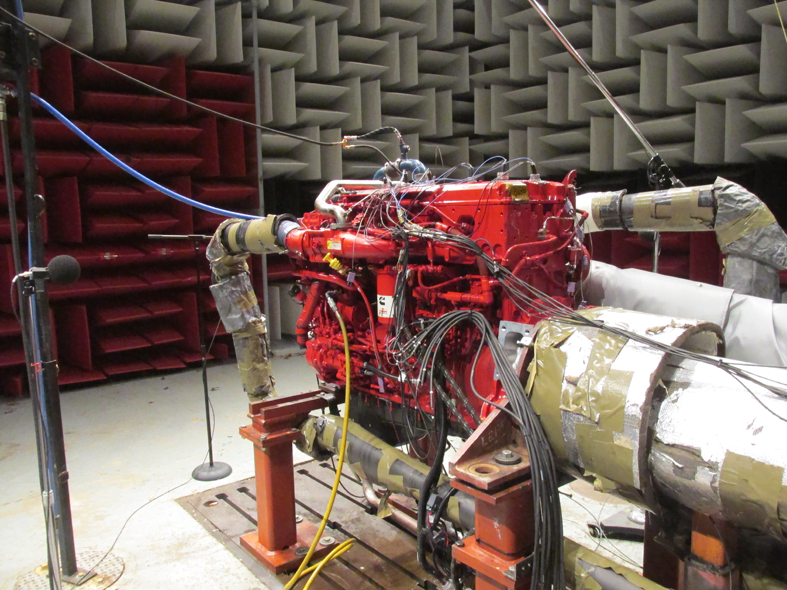 Purdue’s passion
Dr Bolton, is working with his graduate students, Tongyang Shi and Yangfan Liu, to push the boundaries of existing technology and techniques for spatial localization of various noise sources (both combustion and mechanical). Using NAH, he began by assessing current spatial localization of various noise sources (combustion and mechanical). But a well-known limitation of NAH is its upper frequency limit in relation to the size of the array and spacing of its transducers. The transducer spacing must not be greater than one half of the maximum wavelength of the sound emitted from the noise source. This would, for instance, limit the maximum valid frequency for an array with a spacing of 10 cm between transducers to approximately 1700 Hz. However, wideband acoustic holography (WBH) can deal with frequencies that are up to three times greater.

Working together
Having decided on WBH as the methodology, they focused on finding the right set of tools, versatile enough to integrate custom software and algorithms and provide a common framework that could be used in each stage of production. Providing a common set of tools, or framework, would be a great way to align the experimental, design and analysis worlds so that they speak the same language and function better as a team. PULSE™ LabShop was selected because the adaptability designed into LabShop allows users to develop algorithms and software that are tailored for their specific needs. This allowed Dr Bolton and Mr Eberhardt to make applications specifically for diesel engines and keep them within the PULSE LabShop framework and toolset. So not only do they have a tool designed specifically for their area of interest, but that tool stays inside the PULSE framework, which means that the analysis, experimental and design teams can all use a common set of tools.

“Working with Brüel & Kjær in the area of acoustic holography is particularly easy and rewarding because of their long history of technical leadership in this area.”
Dr J. Stuart Bolton - Professor of Mechanical Engineering
Ray W. Herrick Laboratories - Purdue University

Wideband acoustic holography
The next step for Dr Bolton and his team was to reproduce the data generated using the Brüel & Kjær WBH method developed by Jørgen Hald. And as recommended by Jørgen, recreate the sound field and eliminate spurious sources. These spurious sources, or ghost sources, can occur under certain conditions. This is an important aspect of WBH; it is an iterative process, so it eliminates ghost-source problems that can affect other equivalent source identification methods.

Greater resolution
The project is still in progress but they are getting positive results. By using tools that can be shared throughout the engine design process, they aim to create more accurate and detailed representations of the sound profile. They are on track to increase the efficiency of the design process and reduce the number of steps required to solve future noise-related problems.