Previous articles covered the transmission of sound through air and how it is picked up by human hearing. This article addresses sound generation, particularly the vibration of solids and how that leads to sound – using an acoustic guitar as an example.

However, in many systems the supplied energy does not have an oscillatory form. In the case of a guitar, we energize the system by pulling the string. When released, the string falls into an oscillation caused by the interaction between the string’s tension force and its mass. In simple words, whenever the string is plucked, the tension force will try to return it to its default position, a straight line between its two anchor points. This accelerates the string so that the string gains momentum, which will keep the string going past the neutral position and deflect it to the opposite side. This in turn reactivates the forces that try to straighten the string. This give-and-take repeats again and again to produce an oscillation. 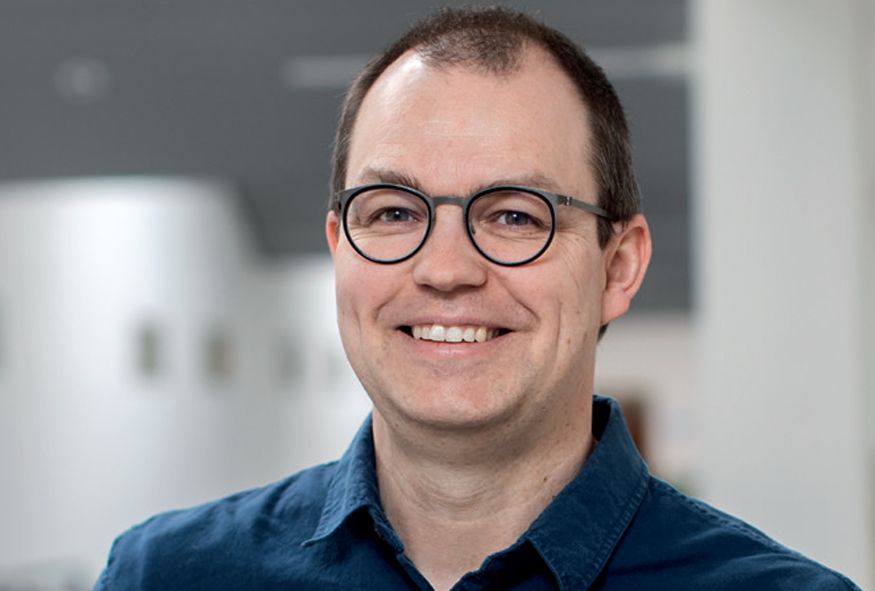 STRING MOTION
Slow-motion playback of a plucked string shows that – rather than swinging from side to side – the ‘triangular’ displacement of the string will move around in cycles as two kinks, see box 1. The reason is simply that the string is a waveguide. Analogous to sound waves moving through air, the energy propagates as waves on the string, spreading from the initial point of disturbance to then moving back and forth between the string’s anchor points. It is possible, however, to look at the vibrations differently: as the combination of several so-called standing waves. A standing wave is a pattern where the crests and troughs have fixed positions, so in contrast to normal wave motion, we do not see them travel. They are the result of waves travelling in opposite directions along a waveguide and interfering with each other, adding their effects or cancelling each other out.

BOX 1: WAVE MOTION ON A STRING OVER TIME
As soon as the string is released, the initial disturbance splits in two parts, simultaneously travelling along the string in both directions. When a kink reaches the end of the string, it is reflected and travels in the opposite direction, swapping sides. When the two waves align again, they briefly form the same, but mirrored displacement as during the initial plucked state. They then pass through each other, and the process repeats itself. During each cycle, a bit of the energy is passed on to the body of the instrument or lost due to damping, such that the magnitude of the displacement gets reduced over time.

Wave theory often describes wave reflection by adding a second wave arriving from beyond the end of a waveguide, here shown below the dashed line. Together, the waves on the guide and their counterparts must fulfill the boundary conditions. In this case, the condition is that the string can never move at its ends, it is fixed. This is only achieved if the waves presenting the reflections have a displacement of the same magnitude but opposite sign, cancelling each other out at the supports. After the waves meet, the ones representing reflections will enter the waveguide, whereas the original waves leave it by continuing beyond the fixed points. 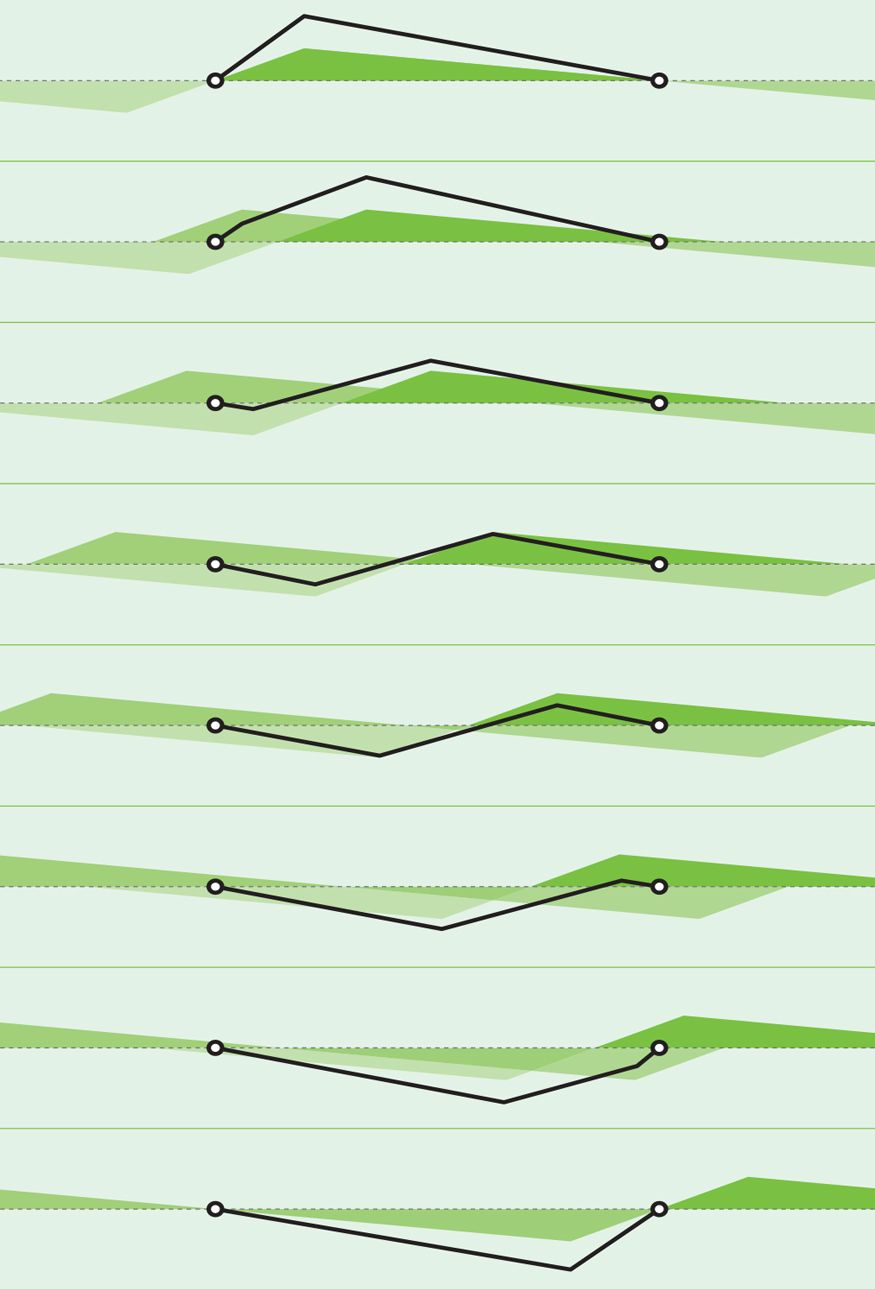 Observers will experience the result of the combination. If the timing of the oppositely travelling waves is such that these constructive and destructive interferences always happen at the same location, there won’t be a perception of travelling; instead, the waves appear to stand still, but with an oscillating amplitude.

Each of these standing waves is associated with a frequency, the number of cycles per second that the string swings from one side to the other with that pattern, see box 2. The shape with the longest wavelength that can fit between the string’s fixed endpoints is the half-sine wave. It has the lowest repeat rate. This frequency is known as the fundamental, and it is the frequency that we perceive as the pitch of the tone generated by the string. The other patterns are repeated at almost perfect multiples of the fundamental frequency – for each cycle of the fundamental, the others have already repeated two or more cycles. The more complex the shape, the higher its associated frequency. These additional frequencies are called overtones, and they enrich the sound.

BOX 2: STANDING WAVES ON A STRING
The shape for the fundamental and its overtones will be the same for any string, though the associated frequencies depend on its length, mass and tension. An increased mass slows down wave propagation on the string, while an increased tension does speed it up. Looking at a guitar this is rather intuitive: the thicker, heavier strings create the lower pitched notes, and increasing the tension by turning the key will gradually raise the pitch of any string. Given a certain speed of wave travel, the longer the string, the longer it will take a wave to make one complete cycle on the string. 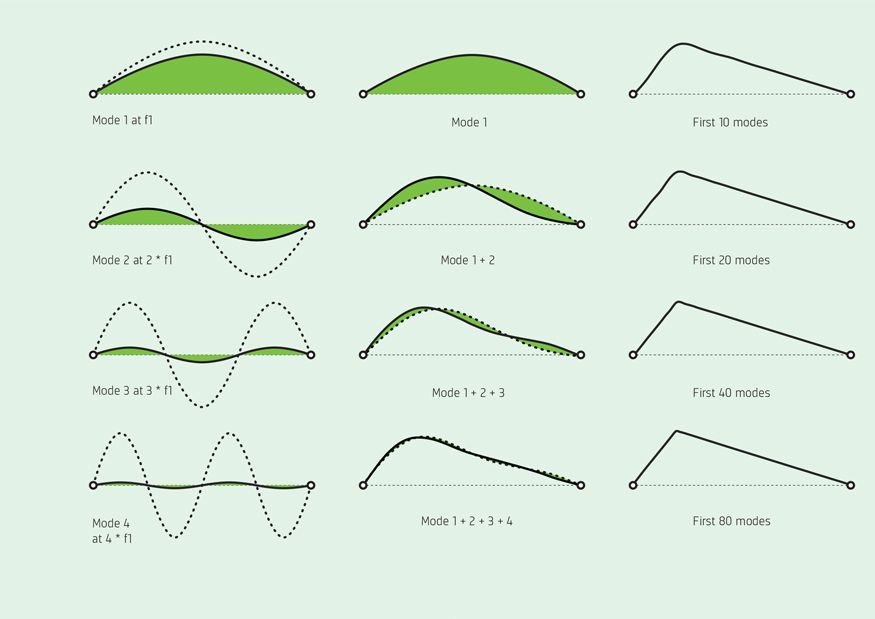 While each of these shapes just moves from one side to the other, adding their displacements together gives the travelling, triangular disturbance. Looking at vibrations over time (the travelling kinks) or considering the individual frequencies (standing waves) is just two sides of the same coin. They are tightly connected: they just provide different insight into the same process.