Engineers can assess noise from many vehicles at the same time with data acquisition synchronized by GPS. 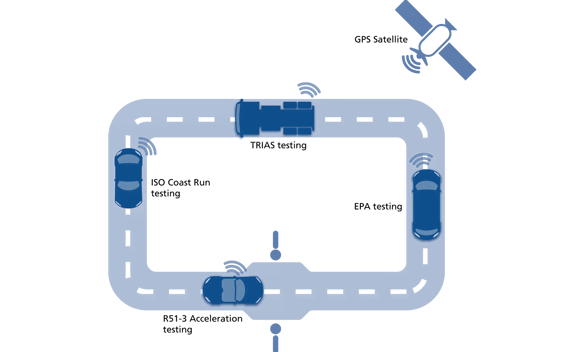 There are ways of reducing it, but there’s no avoiding it: to measure operational noise on vehicles, they need to run on a track. But tracks just keep getting busier. And with new ASEP test provisions and progressively tighter noise regulations on the way, this trend looks like it’s locked in. So what if we could test multiple vehicles at the same time? That’s the ambition behind Brüel & Kjær’s new system, which allows different vehicles to be easily and simultaneously tested with the same trackside setup.

This system is actually composed of two setups: the stationary trackside acquisition setup and the vehicle-borne acquisition setup. The first component is essentially like any ordinary pass-by noise system, with a line of individual microphones past which the vehicle travels, and a data acquisition and analysis capability. But where the overall system departs from tried and tested techniques is the GPS-based time synchronization embedded in the data acquisition.

The GPS synchronisation capability allows the other component of the system – the vehicle-borne data acquisition – to acquire sound data from the trackside acquisition setup that is perfectly matched to its own data. Each vehicle’s individual acquisition setup is the master of the data for that specific vehicle, and since many different vehicles can carry these, they can all use the same trackside setup on the same day, whenever there is an available time slot.

Once a test run is over, the vehicle-borne setup automatically interrogates the trackside setup via WLAN connection. The trackside setup then sends the relevant data automatically to the vehicle, where the incoming data is merged with its own data (measured on the car itself) – also automatically. This vehicle data is normally RPM and speed, and can also include sound or vibration data when on-board transducers are used to diagnose causes of excessive noise. The two datasets are merged with perfect accuracy, and the vehicle-borne setup calculates the pass-by result according to whichever standard is being used.

"Critically for a WLAN-based system, this one is robust because it is not dependent on continuous connectivity – or even consistent connectivity. So it can cope easily with Wi-Fi dropouts caused by trees around the track, reflections from buildings, or sheer distance."

Critically for a WLAN-based system, this one is robust because it is not dependent on continuous connectivity – or even consistent connectivity. So it can cope easily with Wi-Fi dropouts caused by trees around the track, reflections from buildings, or sheer distance. Both trackside and vehicle-borne setups record data independently, and use a GPS timestamp on their respective datasets, so the relevant, corresponding time periods are perfectly synchronized later. The system will normally perform this immediately so the driver can see results in the vehicle, but when that is not possible for connectivity reasons it can simply do it later, when the connection is re-established. LAN cables can even be used, doing away with WLAN entirely. So even if there are problems with WLAN, engineers can begin their testing regardless, confident they will get results. 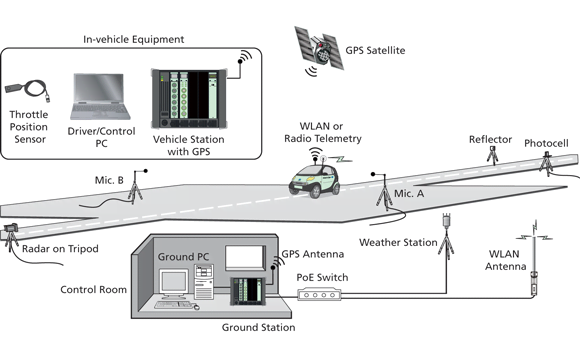 The multi-vehicle pass-by system supports current ISO standards, and is ready for all future additional regulations, including ASEP.

Because the data synchronization between the ground and vehicle setups is automatic, testers can make multiple runs with multiple vehicles, in a random order, without the need for laboriously sorting out data. Rigid test schedules can become a thing of the past, as several vehicles tested to different standards can run in whatever order is required on the ground. Productivity therefore increases, while the many unpredictable contingencies on the track – like vehicles needing attention – are thus easy to accommodate. This also maximizes the use of the track, keeping it as busy as possible.

A test can be initiated when the driver guides her vehicle past a photocell sensor, which triggers the GPS time-stamped recordings simultaneously on both datasets: the vehicle setup’s data and the trackside setup’s data. To assist the driver, the vehicle-borne setup includes a PC with large buttons and an easy-to-use interface that is optimized for single-person use. Large and clear on-screen readouts for speed and RPM help the driver to hold the necessary entry speed target, so a single person can refine their approaches. Ambient sound pressure level and weather station parameters are also displayed in the vehicle, helping the driver select good test conditions. The software is matched to the workflow of different standards, helping the driver work back from her previous exit speed to calculate a new target entry speed. This feature helps reduce the amount of consecutive runs needed to achieve the required conditions.

The vehicle’s acquisition setup controls the test and gathers the data, and after a run is complete, it gathers the trackside data and merges it with its own. This process takes seconds, after which the result is also calculated in seconds. Subsequently, the driver can see the result from her seat, and be sure she has successfully captured the data. She can also see whether the result is achieved, or the test needs redoing. With two-wheelers, a compact telemetry system transmits all data to the LAN-XI-based trackside setup. 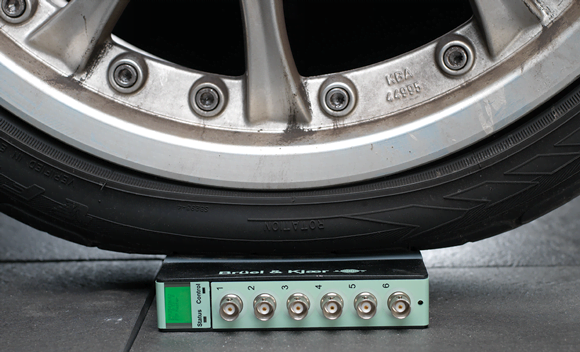 The GPS-enabled data acquisition hardware, LAN-XI, is tough and modular, creating systems from a few channels up to hundreds.

Brüel & Kjær’s LAN-XI data acquisition hardware is highly flexible due to its modularity. The individual modules can be collected, distributed or repurposed at will, allowing diverse parts of an organisation to each use some modules, and then combine them whenever necessary. The new GPS capability gives a highly accurate time signal, so modules can be distributed far and wide, and still achieve perfect sample synchronicity. This opens up a world of possibilities such as cross-spectral analysis, where data measured by accelerometers or microphones on the vehicle can be matched to the external acoustic information perceived by trackside microphones.