A head and torso simulator (HATS) is an objective measurement instrument with built-in, human-like ear and mouth simulators that provides a realistic reproduction of the acoustic properties of an average adult human. High-frequency HATS Type 5128 is an innovative evolution of the legacy HATS Type 4128. This article describes the unique benefits and features of the High-frequency HATS.

The world of communication and entertainment is evolving and consumer expectations for audio quality continue to increase. We knew that the ear simulator of Type 4128 with its cylindrical ear canal did not allow realistic mounting of in-ear devices. Neither was the legendary IEC 711 coupler designed to perform acoustic measurement over the full audio range, 20 Hz to 20 kHz. Therefore, we decided to build a new ear simulator – starting with a human-like pinna and ear canal as well as a unique eardrum simulator that matches the impedance of an average human ear over the full audio range. 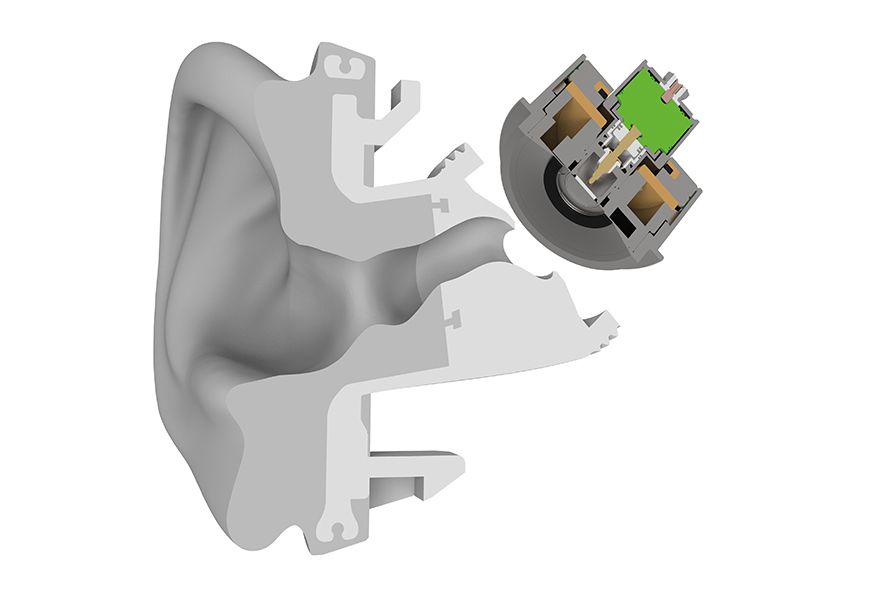 We collected the geometries of a large population of human ears using MRI scanner technology. The full ear canal geometry including the bony part adjoining the eardrum were captured. By post-processing all the data, we were able to determine an average human ear canal geometry. The new ear has an anatomically correct ear canal with an angled eardrum simulator positioned exactly at the location of the eardrum to closely match the human ear. A new design of the pinna interior structure was used to create a more robust ear capable of withstanding more wear and tear. The transition between the soft part (the silicone ear) and the hard material (the end of the ear canal where you attach the eardrum simulator) was designed to retain the transition from the soft to the bony part of the human ear canal.

We also added a soft silicone band all around the ear for better sealing of over-the-ear headphones. A new click-on system, with quick release of the ear simulator, allows for easy ear switching if needed. Finally, we designed a new mechanism to quickly attach and detach the new eardrum simulator from the ear, enabling the use of custom outer ear and ear canal geometry. 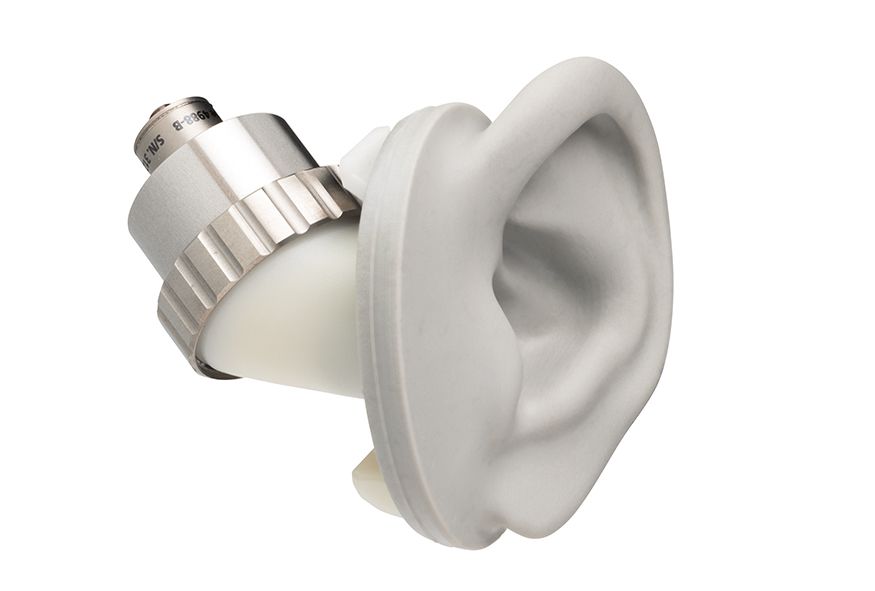 Did you mention a new eardrum simulator?

While measuring the human ear canal anatomy, we also measured the corresponding full range acoustic impedance for every single ear and were able to determine an average human acoustic impedance. To achieve optimal accuracy of the eardrum simulator response up to 20 kHz (remember that the wavelength of a 20 kHz sound wave is shorter than 2 cm) we had to use an unprecedented level of precision in the design and during the manufacturing processes. Our aim was to have an artificial eardrum that is closer to the human eardrum in size. To accommodate this, we developed a new prepolarized ¼-inch microphone with a unique, flat pressure response and a new low-noise preamplifier. A new eardrum simulator was born, matching both the frequency response and acoustic impedance targets. 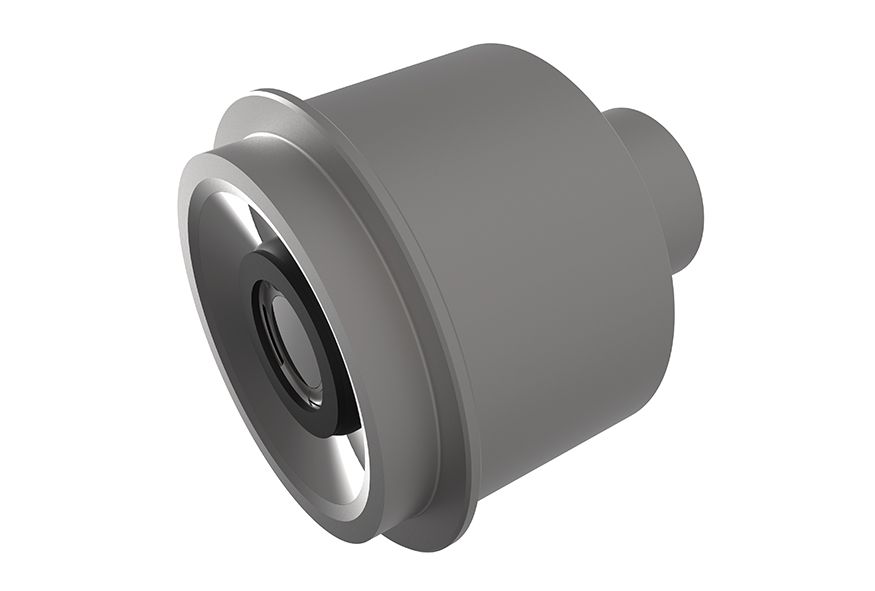 What about that mouth simulator?

The mouth simulator has also been redesigned. Using a custom designed loudspeaker element with an optimized geometry and a stronger magnet system, we optimized the volume of the loudspeaker cabinet. This resulted in a full-range mouth simulator (with an extended response in both the low- and high-frequency range). This also allows the mouth to be louder with an improved high-frequency roll-off. The new mouth also has a built-in amplifier, simplifying measurement setups and reducing system cost.

Did I forget something?

High-frequency HATS Type 5128 was designed with a connector side panel that includes power and signal input for the mouth, and two CCLD microphone connectors (CCLD microphones allow for inexpensive BNC cables, acquisition front end and conditioning system). You do not have to go fishing for cables anymore, everything is clearly labelled and easy to reach. 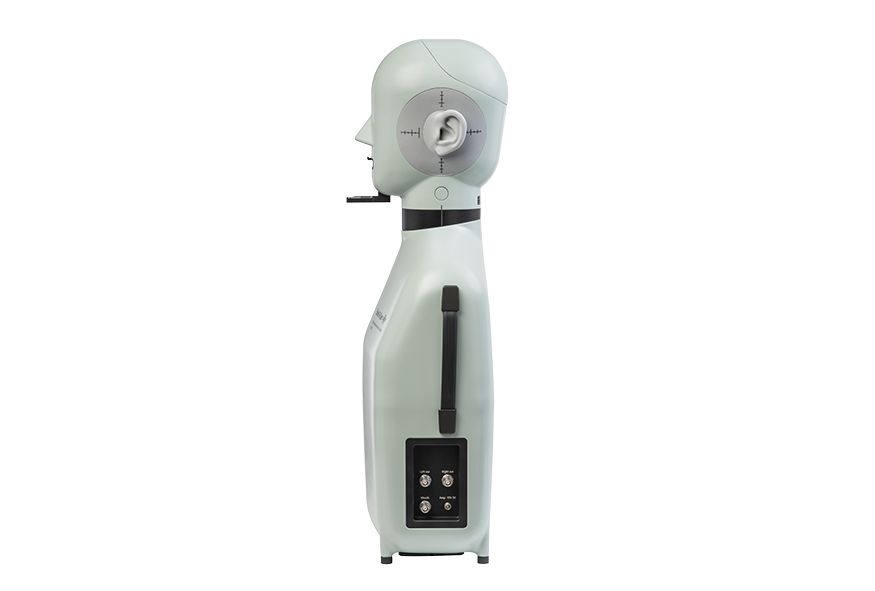 Why do I need the new HATS?

Type 5128 is especially designed to be used when high-frequency content is of importance. This could be testing the audio performance of smart devices, hands free, headphones or hearing aids. Type 5128 loads the devices under test with the exact same impedance as an average human ear. This means that it measures the audio quality of a device in the same way as a human would perceive the quality. The ability to measure in the full audio band (20 Hz to 20 kHz) is a huge step in audio performance evaluation, which potentially could facilitate the retirement of the venerable IEC 711 coupler.