French engineering student RaphaÃ«l Chevalier has developed a device that helps Olympic prone shooters improve their accuracy by up to 24%.

The 50-metre rifle prone shooting event, also called â60 shotsâ, has been part of the Olympic Games since 1908. In this event, competitors shoot from a distance of 50 metres with a .22 long rifle carbine at a target 15 centimetres in diameter.

RaphaÃ«l Chevalier is an engineering student specializing in Materials and Structures at SIGMA Clermont in Clermont-Ferrand, France. An active sports shooter since he was 17, RaphaÃ«l is passionate about the science behind the shot, specifically vibration. Thatâs why he changed his focus from visual and audio techniques to structural vibration. 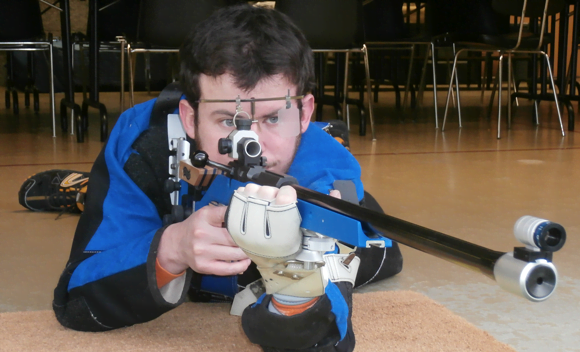 In 2013, RaphaÃ«l met Olympic shooter RÃ©mi Moreno Flores. RÃ©mi is a PhD in Sports Science specializing in carbine shooting performance. With so much in common, the two became friends and RÃ©mi introduced RaphaÃ«l to the rest of the Olympic team.

Rifle shooting is a precise science where the combination of barrel and ammunition affects the bulletâs accuracy. This is mainly due to the gunâs âkickâ, also known as recoil, as the bullet fires: transverse vibrations result from recoil forces in the rifle imparting on the back of the barrel. These vibrations cause a variation in shot accuracy.

âItâs so exciting to be a part of the olympic training process â and really gratifying to see what impact my research and my tools are having on the shootersâ results.â
RaphaÃ«l Chevalier - Engineering Student, Sigma Clermont

RaphaÃ«l soon got the idea to develop a system and corresponding technique for analyzing and predicting how rifles perform with certain ammunition.

He explains, âTraditionally shooters experiment with endless combinations of ammunition and barrel in an attempt to minimize the effect of the vibration. Itâs a lot of trial and error and itâs very time-consuming. You can even be eliminated from a competition if you are using the wrong ammunition. I got the idea to measure the vibration of the rifle to help minimize the trial and error process. With my system, the Olympic team can fine-tune their gear during training in order to improve their performance during competition.â

Once RaphaÃ«l had his methodology in place, he needed some help testing the system, gathering data and analyzing the results, so he contacted BrÃ¼el & KjÃ¦r. âWhen I explained my research project to them, they responded enthusiastically,â says RaphaÃ«l. âThey sent Henri GÃ©renton, who is an application engineer, to meet with us at INSEP (Franceâs National Institute of Sport and Physical Education) and do a half-day measurement session.â

âI was very impressed with the level of research this young group was conducting,â says Henri. âWe had RaphaÃ«l and RÃ©mi, two clearly very clever and passionate people, along with other international-level shooters and their national trainer, Ãric Viller. As a group, they had very keen expertise in this niche domain, and they were conducting top-level research with a good methodology. It was exciting to be a part of it.â

To capture the data they needed, Henri and RaphaÃ«l placed two accelerometers â one vertically and one horizontally â at the extremity of the gun barrel, and they recorded time signals of the shots in order to reconstruct the motion of the muzzle and the muzzle jump (the tendency of the front end of the firearm to rise up after firing).

Henri and RaphaÃ«l recorded signals using BrÃ¼el & KjÃ¦r LAN-XI data acquisition system and PULSEâ ¢ Time Data Recorder software. They made as many recordings as possible in order to increase their statistics, and they changed parameters, such as the gun barrel, the ammunition, the gun itself and the specification of the gun barrel, in a systematic way to achieve a more nuanced view of their results.

âThanks to the measurements done by BrÃ¼el & KjÃ¦r, we have been able to determine the relative impact of some of the parameters on vibration and confirm the efficacy of different types of rifles and gear,â explains RaphaÃ«l. âThat means we were able to calibrate my system for optimizing the barrel-to-ammunition match that will improve shootersâ gear accuracy during training.â

RaphaÃ«l also gathered data for developing a tool for measuring muzzle jump. This tool can help shooters and their coaches better analyze their shots during competitions. Although in experimental stages, the system is already being used to fine-tune rifles for shooters training to qualify for the 2016 Olympic Games.

âItâs so exciting to be a part of the Olympic training process â and really gratifying to see what impact my research and tools are having on the shootersâ results. At the last training session I attended, the trainers saw a 24% improvement in accuracy thanks to my tools. I canât wait to see the results of the Olympics this summer.â