Jabra is a Danish company that designs and produces quality headphones, headsets, and speakerphones. Its focus is ensuring that its products â headsets, speakerphones, headphones, and all their associated accessories â combine to enable clear, accurate, and effortless communication. Life can be stressful enough without trying to figure out what another person, possibly thousands of miles away, is saying because of poor microphone quality or speech intelligibility problems introduced by the speakers.

âWe can measure and gather data, but in the end, what the user cares about is good signal quality.â

Jabra shares the test lab with its sister company, GN Hearing (known for the high-quality hearing aid brands ReSound, Beltone, and Interton), which is worth mentioning because they share a common goal.

Contrary to a common misconception, the goal is not the accurate reproduction of the entire soundscape, the goal is the accurate reproduction of the sounds that convey information. No one wants to hear the wind blasting past the microphone when the hearing aid should be transmitting the sound of an approaching car, and while it is nice to hear bird song, the headset should instead be transmitting the words of the person on the other end of the call. It inspires confidence to know that, while the targets may differ slightly, the testing facilities are designed and used to ensure that the sounds you need to hear are the ones that you will.

When new prototype systems are developed, they must be tested to ensure that they perform as expected, they are safe, and, in some cases, to fine-tune a proposed design or algorithm. The test lab at Jabra gets a lot of use. While much of the testing revolves around making sure that the intended speakersâ voices are what is transmitted, there is also significant testing to safeguard usersâ hearing â making sure that the system will not transmit signals loud enough to damage hearing, for example.

Testing headset receivers and testing loudspeakers cannot be compared because the headset receiver needs to be placed directly on-ear when testing, so a realistic test ear is needed. With artificial ears, testing can be conducted just as a human will hear with the receiver.

SÃ¸ren quips, âYou sometimes use a person, but people can have good and bad days. HATS always has a good day â heâs consistent â you can always rely on the data you get from HATS.â 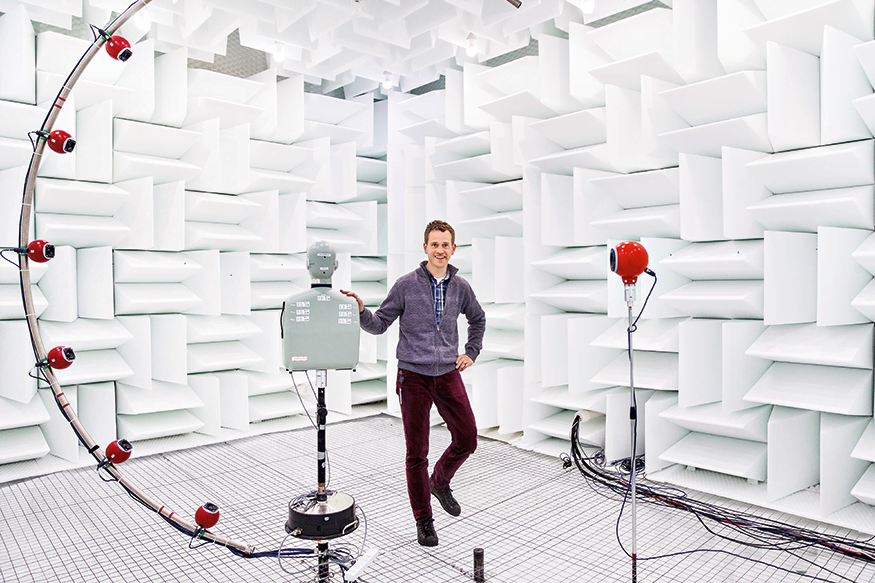 Why test in a way the microphone wonât be used?

The anechoic chamber is used to test for frequency response in order to characterize the microphone directivity. Though it may seem odd to test a microphone by itself when it will not be used away from a personâs face, it is important to test the microphone both on its own, mounted on a pole, and using an artificial head and torso manikin like HATS.

The pole-mounted test is used to generate a polar plot, which is where the directivity of the microphone is characterized. This plot lets engineers see the way the microphone reacts to different frequency bands at different angles. So even though a headset microphone will only be used while worn, characterizing the microphone to find the best orientation for the microphone is an excellent first step in ensuring that the speakerâs voice is the most prevalent source, before the introduction of complex algorithms.

âHATS is an excellent colleague â heâs always in a good mood and I can rely on him every day.â
SÃ¸ren W. Christensen, Test Engineer, GN Store Nord Acoustics Research Lab

In contrast to the anechoic chamber, reverberation room, and wind tunnel, testing in the IEC room and car focus purely on realistic use to ensure, for example, that the day-to-day noise of an open-office environment neither disturbs the listener nor hijacks the microphone. Testing here focuses on isolating the subject from the environment. Building on previous tests where the microphone was characterized, the IEC room can introduce a variety of background noises, such as an office space or cafeteria, and confirm that the system is properly designed and set up or provide data for further fine-tuning.

For example, SÃ¸ren points out that they currently use a number of speakers in their IEC room, and technology is progressing to the point where the test systems can pinpoint the speaker positions. With the ever-increasing quality of computers and test systems, there will be an increased emphasis on creating realistic environments with versatile and reliable equipment, high-quality microphones, loudspeakers, analyzers, and software.

There are many tests to perform and many environments in which to test: an anechoic chamber (1), a reverberation room (2), a listening (or IEC room) room (3), a car set up similarly to the IEC room (4) and a wind tunnel (5).

All of these test environments exist to test for specific data and responses and are used in different ways. The anechoic chamber and wind tunnel test under carefully controlled conditions in accordance with zero interference and under more realistic conditions. The IEC room, reverberation chamber, and car are only used to test realistic conditions. In all the rooms, the realistic test conditions are still controlled for repeatability and use a head and torso simulator. 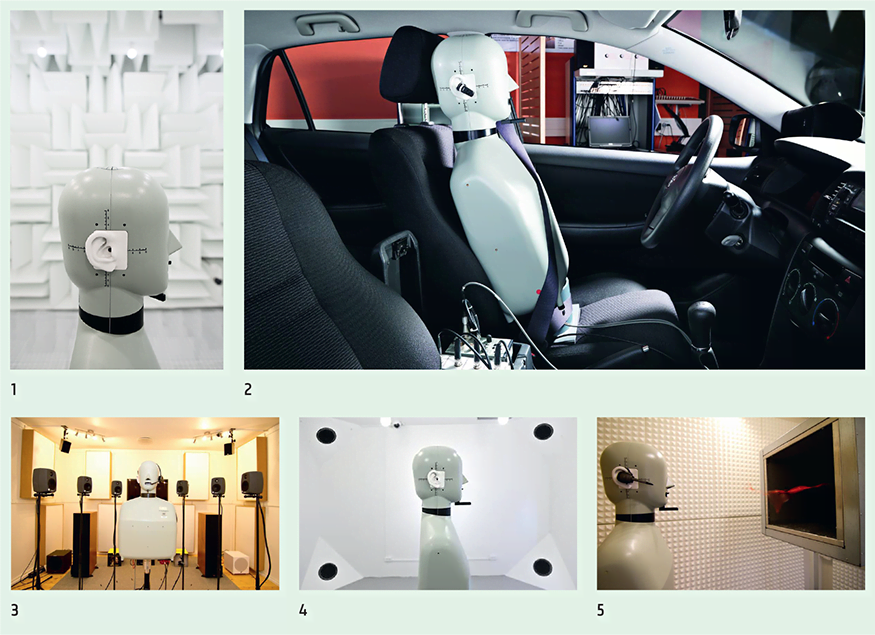