Only in the final hot weeks of late summer do combine harvesters appear, carving their dusty trails through dry cornfields. To exploit every last minute while conditions are optimal, New Holland’s developers work hard to reduce the time driving between fields.

Humidity in the corn varies widely between fields, due to very specific conditions like a field’s angle to the sun, shelter from the wind, and topography. With widely spread farms, modern famers must dispatch harvesters to the right field at the right time, not half an hour later when the dew has fallen. Every minute on the road is one less in the field while the corn is at optimal humidity – it may never be so profitable again. 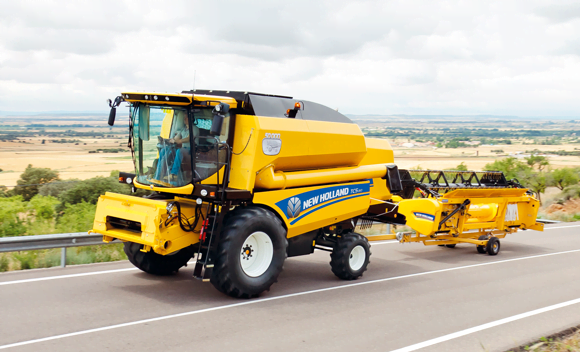 To drive unassisted on EU roads, combines must fulfil road vehicle legislation such as a 3.5 meter width, stability checks and speed requirements. Just as trucks have a lower speed limit than cars, there are progressively lower limits for agricultural vehicles. These differ by country: in France the limit is still 25 km/h, while in Germany and Belgium, combines can now legally reach 40 km/h – if they pass relevant tests.

Passing the tests for 40 km/h is challenging. Higher speed limits place stricter requirements on vehicles, like braking. Remaining within noise limits is particularly hard. As New Holland’s Test Engineer Pieter Calmeyn says, “With noise it is often very hard to interpret what you are seeing.”

At 40 km/h, noises above 90 dBA could be due to a specific component or amplification in the sound’s path through the structure. As Pieter says, “It’s no good just having a sound level; we need to interpret the results. And the earlier, the better.” Since any new components require field testing over two to three harvest seasons, early identification of noise problems avoids years of wasted durability proving. “Noise also reveals overloaded components, so by listening to the machine, we can really tell how it is working,” says Pieter.

At New Holland’s Center of Harvesting Excellence in Belgium, Pieter and his team use a pass-by noise measurement system to assess legal noise compliance at all stages of a combine’s development, so engineers can see which frequencies cause exceedances as a prototype drives past the microphones. “Just having the spectra in relation to the vehicle’s position is our first level of interpretation. If certain noise peaks are highest before the microphones or just after, we can see which area of the vehicle they come from,” says Pieter.

A GPS capability in the data acquisition hardware makes this possible. This also implants a highly accurate ‘time stamp’ in the sound and vibration data. Because it is a common time signal, it allows precise synchronization with other datasets like the vehicle’s own CAN Bus data. Therefore, engineers can correlate machine parameters like engine speed, hydraulic pressure and hydromotors with sound peaks measured outside.

To further drill down into details, New Holland mounts microphones and accelerometers on the vehicle, and synchronizes them with the pass-by data, giving very detailed correlations between specific components and the acoustic levels where the legal limit is measured. “I can extract components easily,” says Pieter. “I make a source path contribution analysis based on the frequency spectrum and then extract the orders related to a component.” 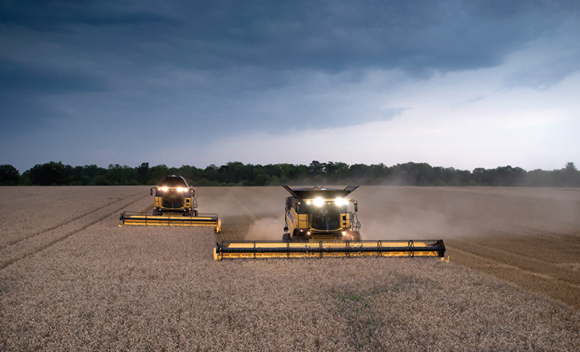 The best mitigation strategy is to resolve noisy components, which might be the diesel engine, a specific hydromotor or hydraulic pump. In some cases, designers can select an alternative sub-supplier, or take a component from another machine, which also avoids field-proving it. Another strategy is to interrupt the noise’s path through the structure. They can also use noise shielding, though field trials can prove too demanding.

The key is to try out different ideas and alternatives and assess their effect on pass-by noise. In a little over a year, New Holland has performed 600 such tests. “But more important than the amount, is the level of interpretation this means,” explains Pieter. “Before, designers had a certain noise level to work with. Now we give them specific components or paths that are problematic. A better interpretation of their design at the beginning of a project is a great advantage.” 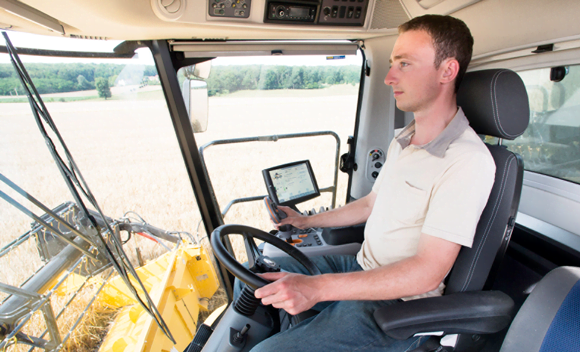 Comfort reduces the driver’s fatigue, and New Holland’s Harvest Suite cab leads the market with a 73 dB(A) noise level thanks to significant investigations into glass layups combined with frequency-optimized materials.

With detailed information, departments can collaborate more effectively. As Pieter says, “One redesign of a drivetrain cog together with our simulation department reduced noise by 7 dB because we could pass on precise identification and sound frequency components to the FE modelling department.” Moreover, as such test outcomes generate awareness throughout New Holland, a snowballing effect brings ever-more test requests.

Such valuable test integration is necessary to meet the challenging noise limits at faster road speeds, and according to Pieter, his equipment is key. “The tools are getting better and better,” he says. “Now measurement equipment has changed, we should take advantage of it, and also change and adapt to it.” It is not so different from agricultural machinery. “You used to have to brake when you saw a tractor,” says Pieter. “But today they’re driving at 50 km/h. The combines are part of this trend.”

Harvesting is a trade-off between harvesting speed, the quality of the harvested grain and straw, and the grain left in the field. New Holland combines analyse the grain dropping out of the mechanism by detecting their vibration signatures as they hit a plate. The analysis gives an essential performance parameter on the driver’s display screens.