Keith Yates Design (KYD) works with each client to create spaces where acoustics, architecture, indoor air quality (IAQ) and light control are optimized in an aesthetically designed room you actually want in your home – not sacrificing function for form or vice versa, but creating an environment where they exist together in harmony.

"It’s not just about the things that elevate the you-are-there experience, it’s also about tackling the dozens of things conspiring to diminish or prevent it."
Mark Glazier, Director of Business Development

KYD does not sell or install A/V equipment, their involvement ranges from basic architectural, acoustic, electroacoustic and audiovisual layout design in their Essentials package, to comprehensive computer modelling and optimization in their Red projects, to all-out theatre experience that pushes the state-of-the-art boundaries in their Black Label projects. And the venue they designed for Rob Hahn, a retired cinematographer, has become a poster child for their Black Label program.

The Hahn Theatre concept
All KYD projects begin with the mandate to maximize sonic and visual signal-to-noise ratios. As a frame of reference (using noise criteria, balanced (NCB) curves as measurement standards), the Essentials package specifies NCB 15, the same background noise level as major recording studios; Red specifies NCB 10; and Black Label specifies NCB 5 but aims for NCB 0 or less. Then additional customer requirements are added in. The Hahn theatre, for example, is sandwiched between two potentially intrusive low-frequency noise sources: garage door motor and vehicle rumble below, and a huge heating, ventilation and air conditioning (HVAC) system in the attic above.

Specification for one of the twelve different wall typesAside from noise coming into the theatre, the deep bass had to be prevented from escaping into the master bedroom just 18 feet away, where his wife wanted to sleep without disturbance even during War of the Worlds or Apocalypse Now at theatrical levels. This was particularly difficult given KYD’s proprietary UberSub system that can generate thuds and infrasonic rumbles at 125 – 133 dB, well below 10 Hz.

HVAC – cozy and … clean?
The HVAC system design goes beyond simply maintaining a comfortable temperature and humidity levels. The currents, velocity field, thermal gradients, and air ‘aging’ are modelled in-house in computational fluid dynamics (CFD) software to comply with their IAQ standards and ensure that breathing-related carbon dioxide and other human ‘bio-effluents’ are quickly moved away from the audience. This is particularly important in private theatres because they are typically tightly sealed to prevent noise transmission; are stuffed with soft, volatile organic compound- (VOC-) emitting materials; have high occupant densities; and lack windows or sunlight to inhibit microbial growth. Yates quips that “too many home theatres amount to a large, expensive Petri dish with a loud TV.” In Black Label projects, the target is 7 to 10 HEPA-filtered air changes per hour, with fresh, outside air accounting for 30 – 50 percent of that air volume. 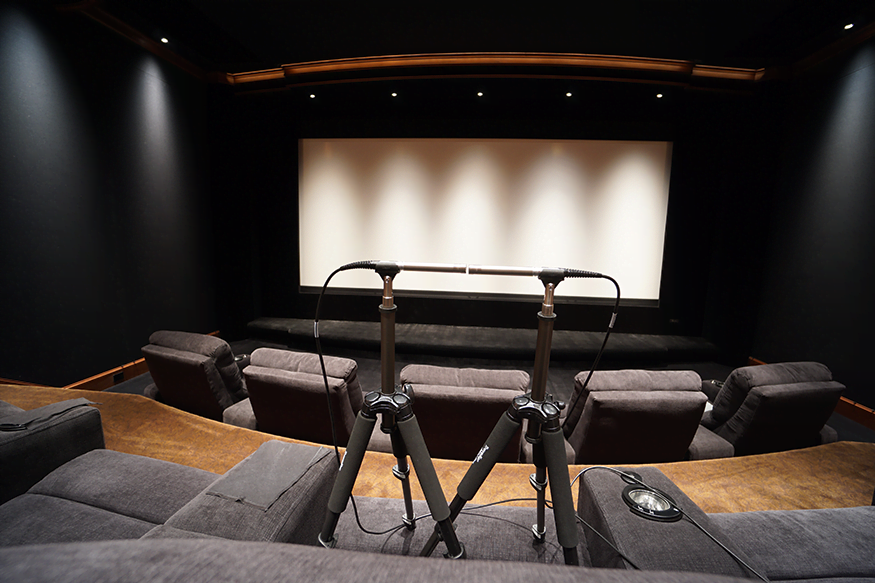 Two-microphone coherent power measurement technique set-upNoise floor and room acoustics
Once the Hahn theatre concept and layout were approved, the 3D model was brought into finite element and various acoustic simulation packages. The isolated room envelope was tuned, detailed, dimensioned and issued as a stack of construction drawings. The blueprints are very detailed and specific, and they need to be. To isolate the theatre from garage rumble below, the structure had to support a six-inch-thick concrete pan deck, two inches of isolation material, then a floating three-inch-thick reinforced concrete floor, upon which the theatre’s interior shell rests. Twelve different wall types, each with different acoustical properties, were specified, detailed, installed and tested. Two sets of massive tandem doors function as sound and lightlocks rather than just doors.

Of course, there is the testing to ensure that the room reaches its target levels. Initially they used a Brüel & Kjær 1-inch low-noise microphone for measuring ultra-low sound pressure levels. With it they were capable of measuring down to NCB –1 (the hearing threshold), at which point the microphone was limited by its own self-noise. Recently, however, a new measurement method (the two-microphone coherent power measurement technique) has been developed. Yates and his team returned and used that method with two Type 4179 microphones. They measured the Hahn theatre at NCB –6 with the HVAC on high. 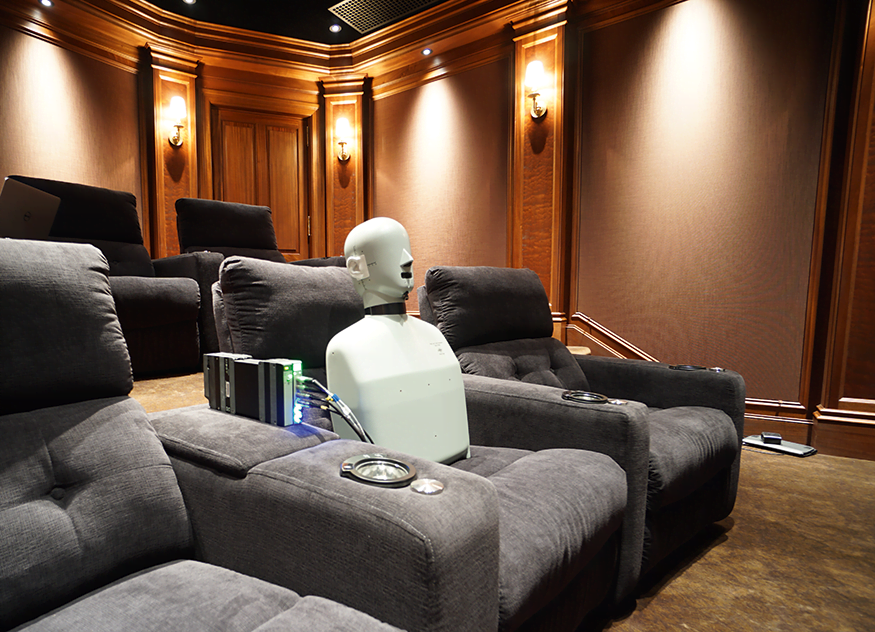 Mr HATS watching MannequinThe room’s isolation and acoustics were checked throughout the construction process, including a Brüel & Kjær Type 3207 tapping machine for vibration from above. With the room shell built, a complex array of acoustic treatments was installed to ensure that the audience received the intended spectrum of reflected sound from the intended places at the intended times.

What do you get?
What is the result when the primary noise concerns are now coming from the lights? You get the movie’s deepest infrasonic vibrations, clarity, speech intelligibility, listener envelopment and more that lead to immersive experiences. This brings the audience into the movie, and that inspires passion for the art. Imagine Das Boot, an entire crew trapped in a sub, where they all stop, listening, straining to hear a destroyer above, and in that stillness, holding your breath, the only sound you hear is your own heart beating anxiously along with theirs.

"If the room’s acoustic treatment scheme doesn’t target the range from about middle-c down to at least the 31 Hz band, you get a muddled, opaque mess … – Immersion isn’t just about loud."
Keith Yates, Founder and Principal Project Designer, Keith Yates Design 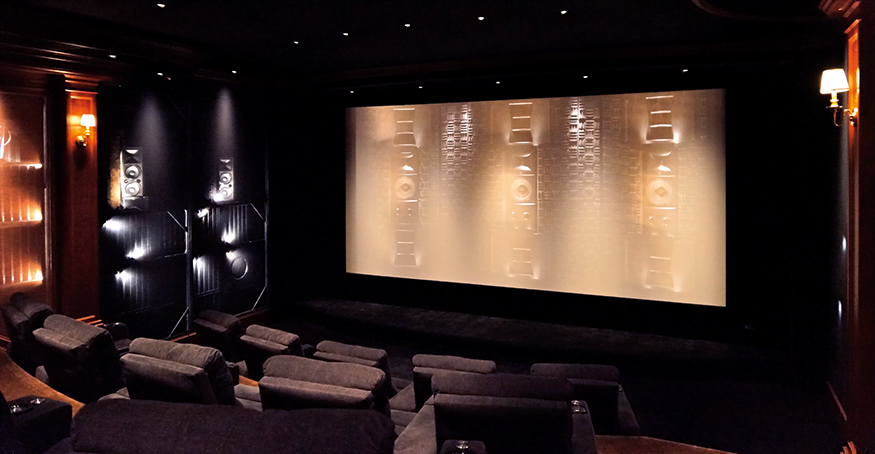 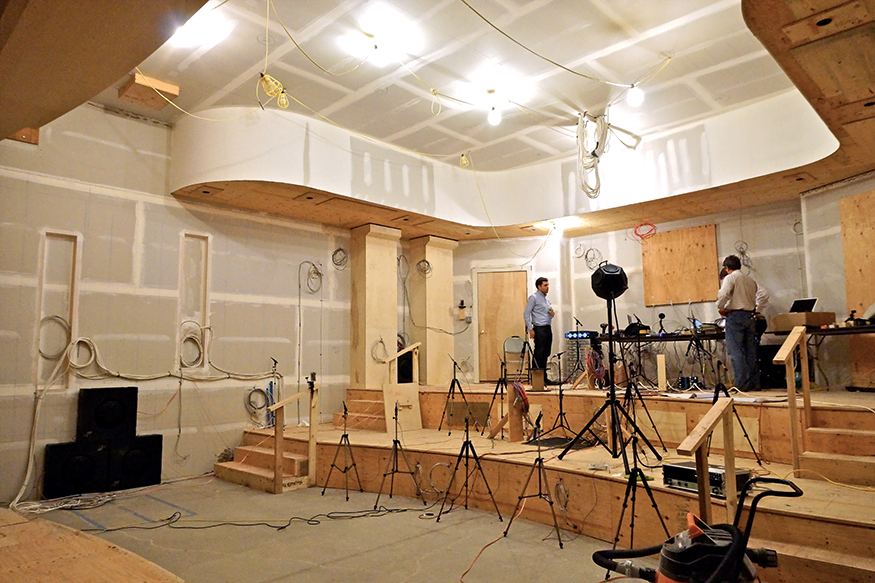