With a workforce of more than 14,000 people, Air France Industries is one of the major players in engine MRO and services more than 3000 aircraft operated by 200 airlines worldwide. This case study focuses on how Air France has optimized its Zephyr test bench using Tescia.

Air France is a leading global player in its three main areas of activity: passenger transport, cargo transport and aircraft maintenance. Founded in 1933, Air France is the number one French airline and, together with KLM, one of the world’s largest air carriers by revenue and passengers transported.

To pass a performance test, the parameters of an aircraft engine are rigorously checked.

In the case of vibration, the correct balance is checked at two points on the engine and monitored by permanently mounted accelerometers that continuously record the vibratory displacement, which must remain within a very precise tolerance level.

The integration of a Tescia® repetitive testing system, including HBK’s renowned LAN‐XI data acquisition hardware and a dedicated PC, into the Zephyr bench.

Visual inspection of a nacelle 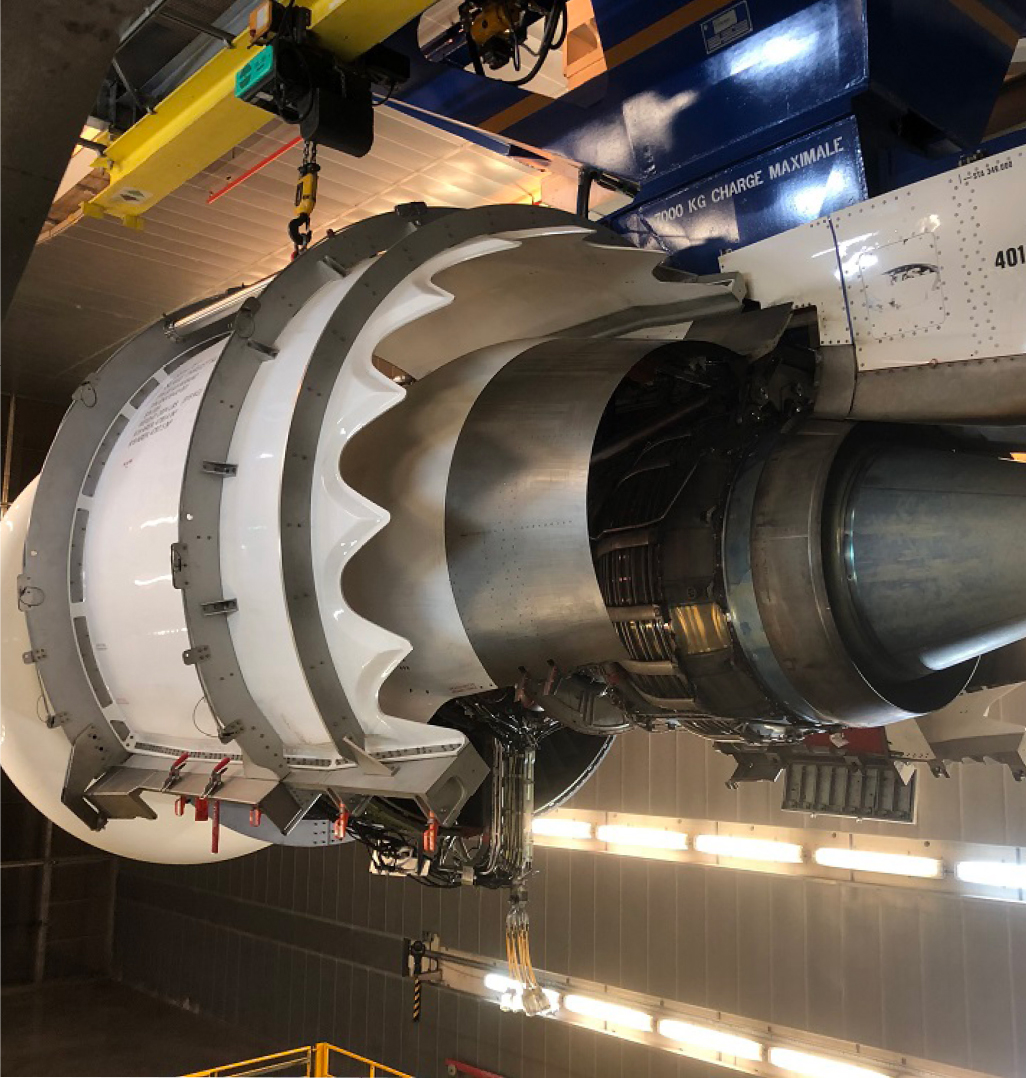 Engine mounted inside a test cell for performance validation.

The check and overhaul of the engines, or Engine Shop Visit in aeronautical terms, takes place after a certain number of flight hours specified by the manufacturer, or during a major maintenance carried out every four or five years. With a workforce of more than 14,000 people, Air France Industries is one of the major players in engine MRO and services more than 3000 aircraft operated by 200 airlines worldwide.

An aircraft engine that needs to be overhauled spends about three months at the Air France Industries workshops at Orly and Roissy. The engine is dismantled, the parts are inspected in minute detail, cleaned, changed or repaired, and the whole assembly is reassembled by the dedicated technical teams before final testing.

Before being allowed to fly again, an engine must be tested in conditions as close as possible to real life circumstances and must pass a performance test on the Zephyr test bench, where many parameters are checked including thrust, temperature at different points on the engine, pressure, and vibration levels.

The bench will of course prepare for this crucial stage and, in the case of vibration, the correct balance will be checked and adjusted at two points on the engine and measured by permanently mounted accelerometers. These sensors continuously record the vibratory displacement during aircraft operation, which must remain within a very precise tolerance level. Wishing to go further with these vibration measurements and to gain more expertise in this field, Ivan Rouesné, Zephyr’s Dubanc Manager, contacted HBK.

After analyzing the customer’s requirements, Philippe Potereau, HBK’s Business Development Manager, initially proposed to temporarily add a parallel system dedicated to repetitive vibration measurements into the Zephyr bench – that is the Tescia repetitive testing system designed in close collaboration with users from the aerospace industry for the measurement of rotating machines. A complete system, which includes Brüel & Kjær’s renowned LAN‐XI data acquisition hardware and a dedicated PC, can be used in a small production environment with just one user, or in a larger system with multiple test and monitoring seats, guaranteeing immediate and reliable access to data by several teams simultaneously. 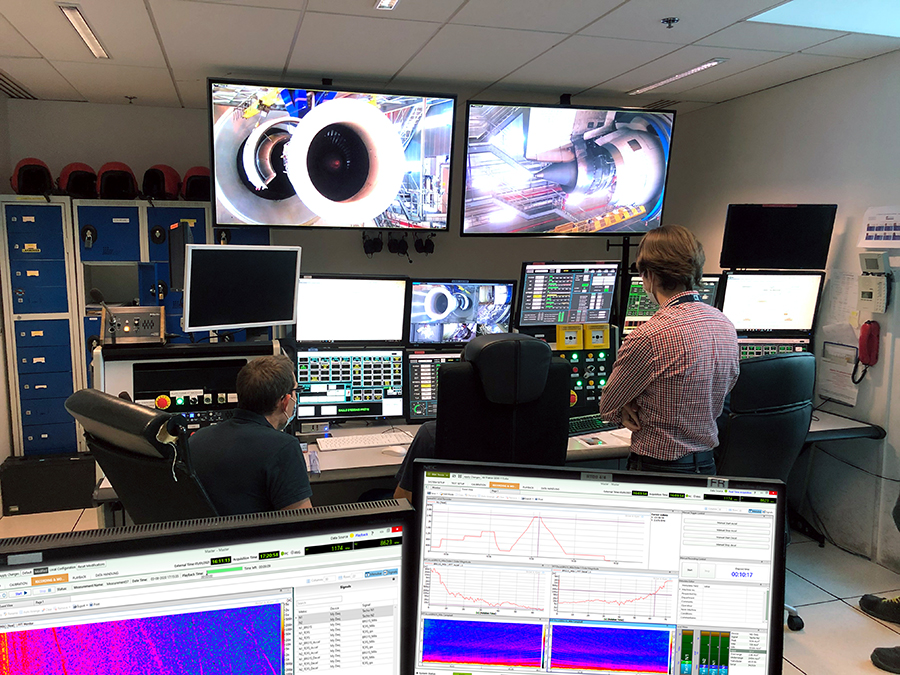 A performance test seen from inside the control room, with Tescia software providing additional data insight and validation


UNDERSTANDING THE BEHAVIOUR OF VIBRATION

“The Air France Industries team of technicians and engineers was quickly up to speed with the help of HBK’s American teams providing round-the-clock support for the use of Tescia and the analysis of the data collected,” says Ivan Rouesné, head of the engine test bed. He continues, “The motors are balanced by us when they are reassembled.

“The vibration measurement may seem like a minor detail compared to everything we do on a GE90 -115 type engine. In a performance test, large forces are developed, and the slightest sign of unbalance is to be avoided at all costs. A complete test is done in two seven-hour shifts, but if the amount of vibration displacement due to balancing is out of tolerance, we may have to stop a take-off test that consumes a lot of fuel for nothing.

“What we ask of a measurement system is absolute reliability and a guarantee that what we measure is accurate and has no effect on engine operation. Wanting an additional – more expert and more detailed – vibration measurement in parallel on the test bench, we turned to HBK and appreciated the high availability of the support and the level of expertise. We were able to better understand our signals and learnt how to handle them with confidence. We were able to remotely check our non-physically accessible accelerometers to ensure that our measurements were consistent. On the GE90-115 engines powering the Boeing 777, measurements made on two couplings, which rotate at different speeds, are constantly monitored and must not exceed a set level of displacement. We were able to interpret their vibration behaviour easily on the Tescia system, which immediately gave us simple information from complex processes such as the use of tracking filters to obtain clear and reliable signals.”

The LAN-XI data acquisition front-end driven by Tescia software pleasantly surprised the users of the Zephyr test bench by its compactness and functionality. They can now go further in their analysis in preparation for performance tests and look forward to continuing to gain engine expertise with the new system, and receiving technical support from HBK.

The order analysis performed by the Tescia system is an extremely powerful tool that transforms the variable speed of the engine rotation into a fixed and easily spotted signal: order 1, the first vertical line on the abscissa (x axis) of the graph marked from 0 to 5. 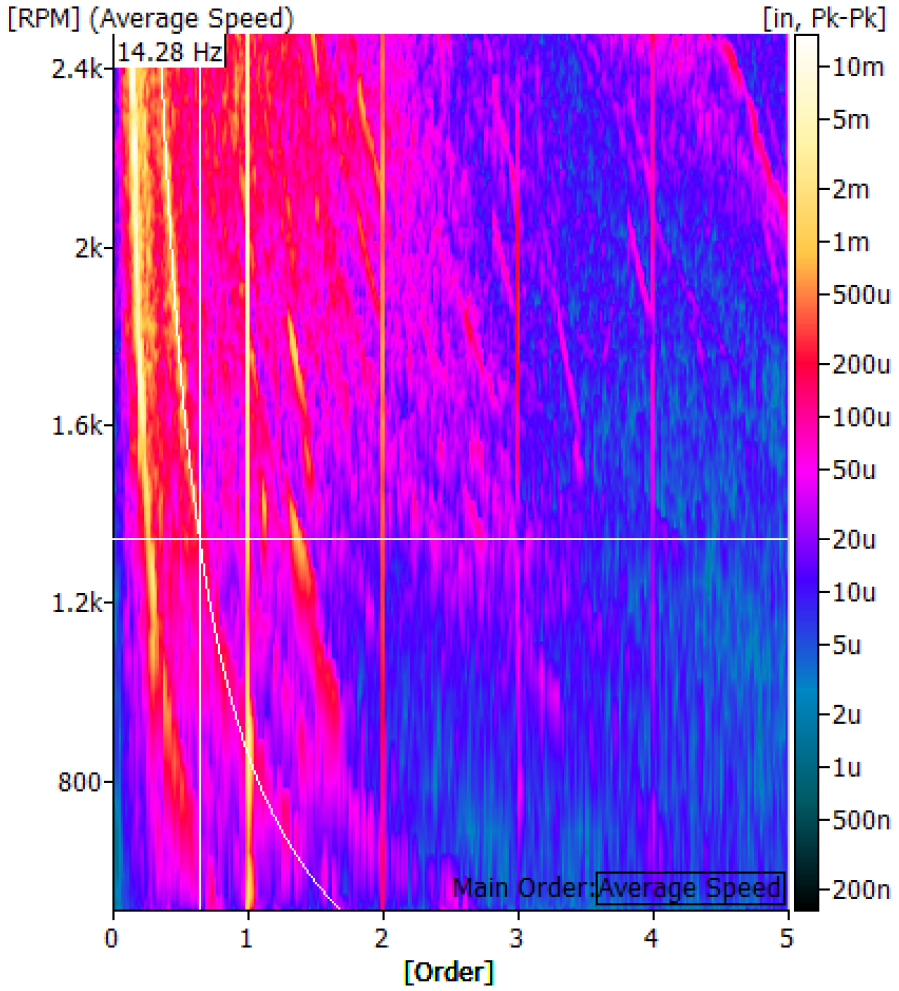 The thickness of this line changes as the speed of the engine rises on the ordinate (y axis) of the graph, from 0 to 2400 rpm. Order 1 represents the vibration energy of the monitored axis. This transformation is made possible using tachometers and filtering managed by the
Tescia system. The higher harmonics of this signal are also shown as vertical lines, so it is understandable that the fourth harmonic of the signal still develops energy as the engine rises in speed. The energy levels are shown in colour on the graph – from blue for the lowest levels to red for the intermediate levels and yellow for the highest. The scale to the right of the graph gives the vibration displacement values in inch peak-to-peak as a function of colour.

The resonant frequencies of the structure are fixed and are, therefore, seen as curves such as the 14.28 Hz frequency marked by the cursor on the graph at approximately 1300 rpm. At 800 rpm this resonance frequency coincides with the first order of rotation, creating a slight widening of the vertical line representing it. It is this type of interaction that creates amplified vibrations and is often indicated by acoustic noise emitted by the structure whose resonance at this frequency is excited by the passage of the engine speed.

These analyses, in addition to the usual profiles, enable Air France Industries to identify more quickly the causes of a possible overshoot of the level allowed by the maintenance procedure.

WATCH VIDEO
Behind the scenes of an engine overhaul