Avoiding errors is part of the measuring vibration introduction which answers some of the basic questions asked by the newcomer to vibration measurement. It gives a brief explanation of the following: avoiding errors due to accelerometer resonance, how to choose a mounting position for the accelerometer, and how to mount it.

The reason for measuring vibration on the object will usually dictate the position of the measuring point. Take the bearing housing in the drawing as an example. Here, acceleration measurements are being used to monitor the running condition of the shaft and bearing. The accelerometer should be positioned to maintain a direct path for the vibration from the bearing.

The question also arises â in which direction should one measure on the machine element in question? It is impossible to state a general rule, but as an example, for the bearing shown, one could gain valuable information for monitoring purposes by measuring both in the axial direction and one of the radial directions, usually, the one expected to have the lowest stiffness.

The response of mechanical objects to forced vibrations is a complex phenomenon so that one can expect, especially at high frequencies, to measure significantly different vibration levels and frequency spectra, even on adjacent measuring points on the same machine element. 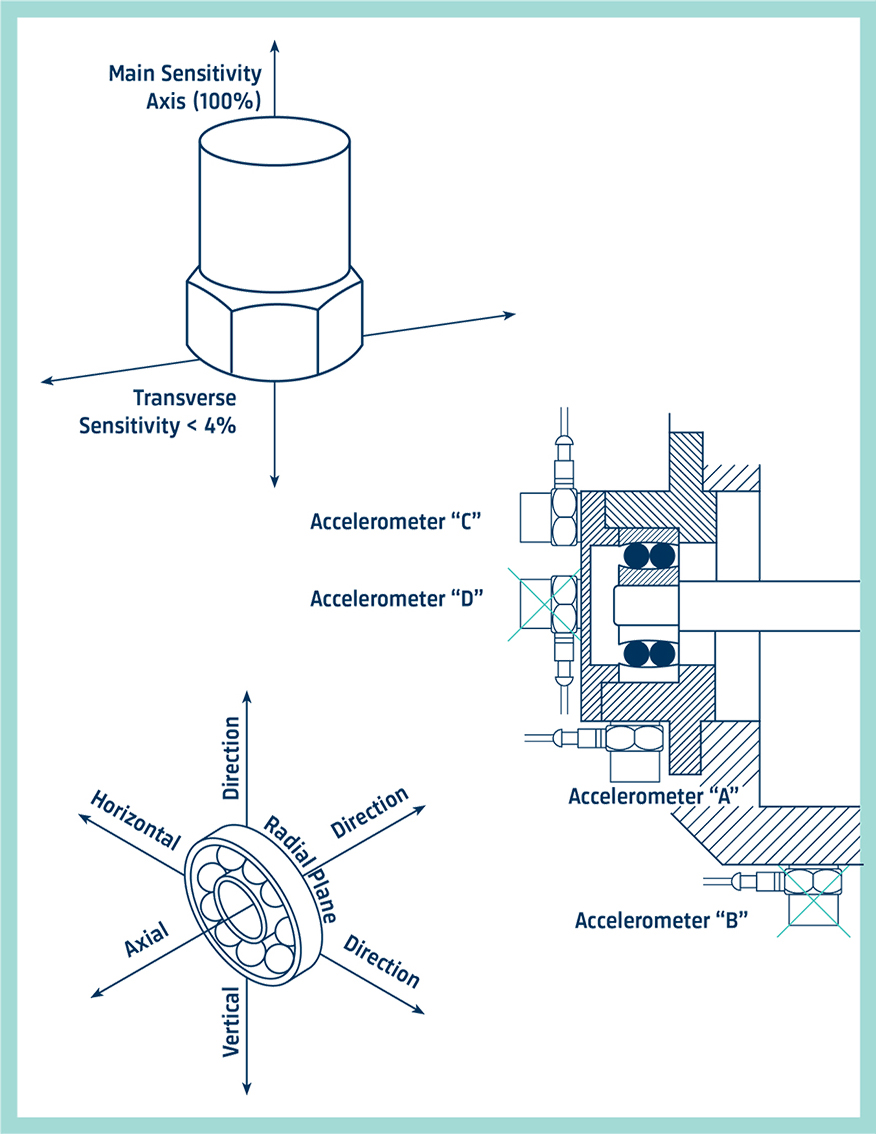 The method of mounting the accelerometer to the measuring point is one of the most critical factors in obtaining accurate results from practical vibration measurements. Sloppy mounting results in a reduction in the mounted resonant frequency, which can severely limit the useful frequency range of the accelerometer.

The ideal mounting is by a threaded stud onto a flat, smooth surface as shown in the drawing. A thin layer of grease applied to the mounting surface before tightening down the accelerometer will usually improve the mounting stiffness and thereby ensure a mounted resonant frequency close to the specification.

The tapped hole in the machine part should be sufficiently deep so that the stud is not forced into the base of the accelerometer. The upper drawing shows a typical response curve of a general-purpose accelerometer mounted with a fixing stud on a flat surface. The resonant frequency attained is almost as high as the 32kHz mounted resonant frequency attained under calibration where the mounting surface is dead flat and smooth.

A commonly used alternative mounting method is the use of a thin layer of beeswax for sticking the accelerometer into place. Remember to squeeze the layer of wax as much as possible to get a very thin layer! As can be seen from the response curve, the resonant frequency is only slightly reduced (to 29kHz). Because beeswax becomes soft at higher temperatures, the method is restricted to about 40Â°C. With clean surfaces, bees-wax fixing is usable up to acceleration levels of about 100 m/s2. 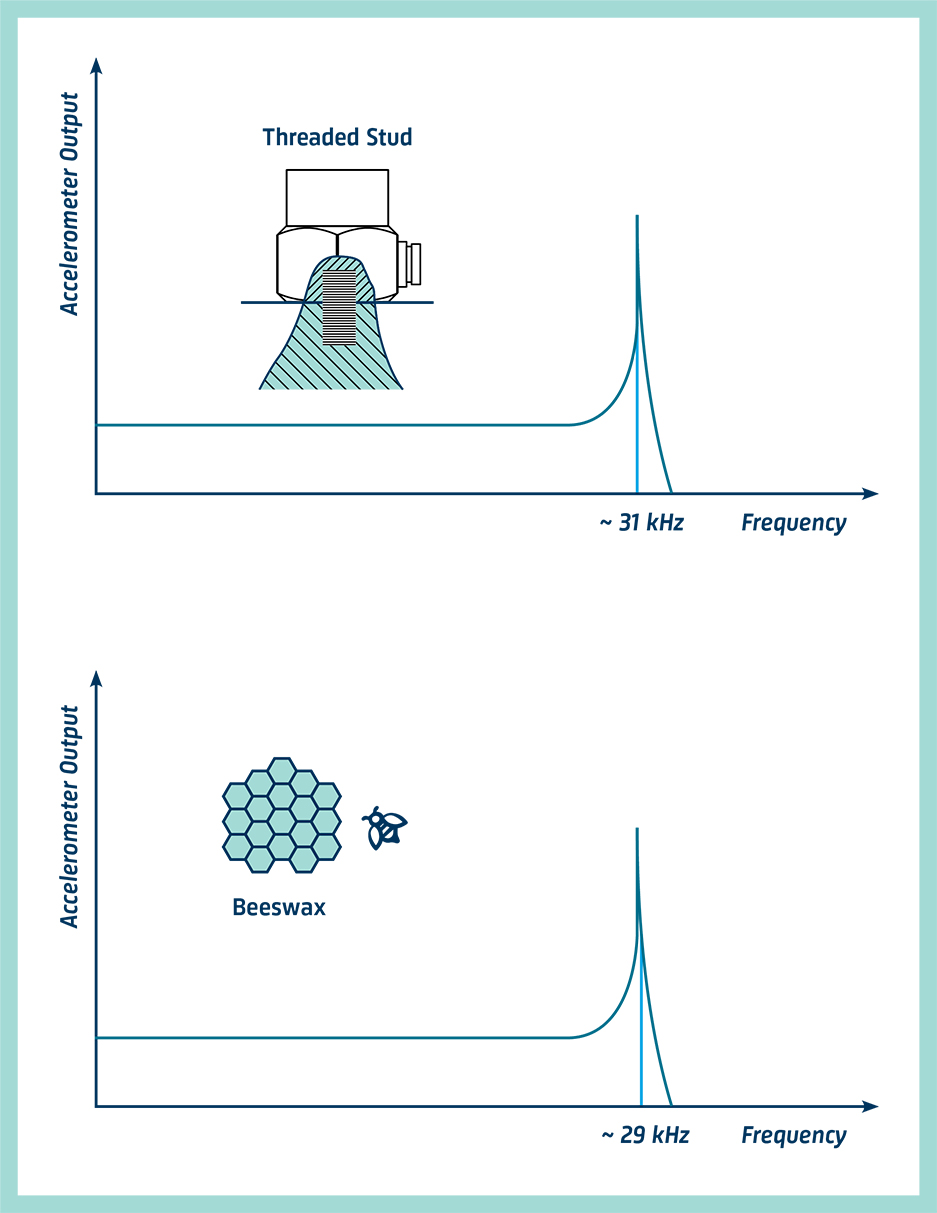 Where permanent measuring points are to be established on a machine and it is not wished to drill and tap fixing holes, cementing studs can be used. They are attached to the measuring point using hard glue. Epoxy and cyanoacrylate types are recommended as soft glues can considerably reduce the usable frequency range of the accelerometer.

A mica washer and isolated stud are used where the body of the accelerometer should be electrically isolated from the measuring object. This is normally to prevent ground loops, but more about that under "Environmental Influences". A thin slice should be peeled from the thick mica washer supplied. This fixing method also gives good results, the resonance frequency of the test accelerometer only being reduced to about 28 kHz.

A permanent magnet is a simple attachment method where the measuring point is a flat magnetic surface. It also electrically isolates the accelerometer when an isolating disk is used. This method reduces the resonant frequency of the test accelerometer to about 13 to 20 kHz depending on whether isolation disk is used and on whether silicon grease is used for the mounting, and consequently cannot be used for measurements much above 7 to 13 kHz. The holding force of the magnet is sufficient for vibration levels up to 1000 m/s2 depending on the size of the accelerometer. 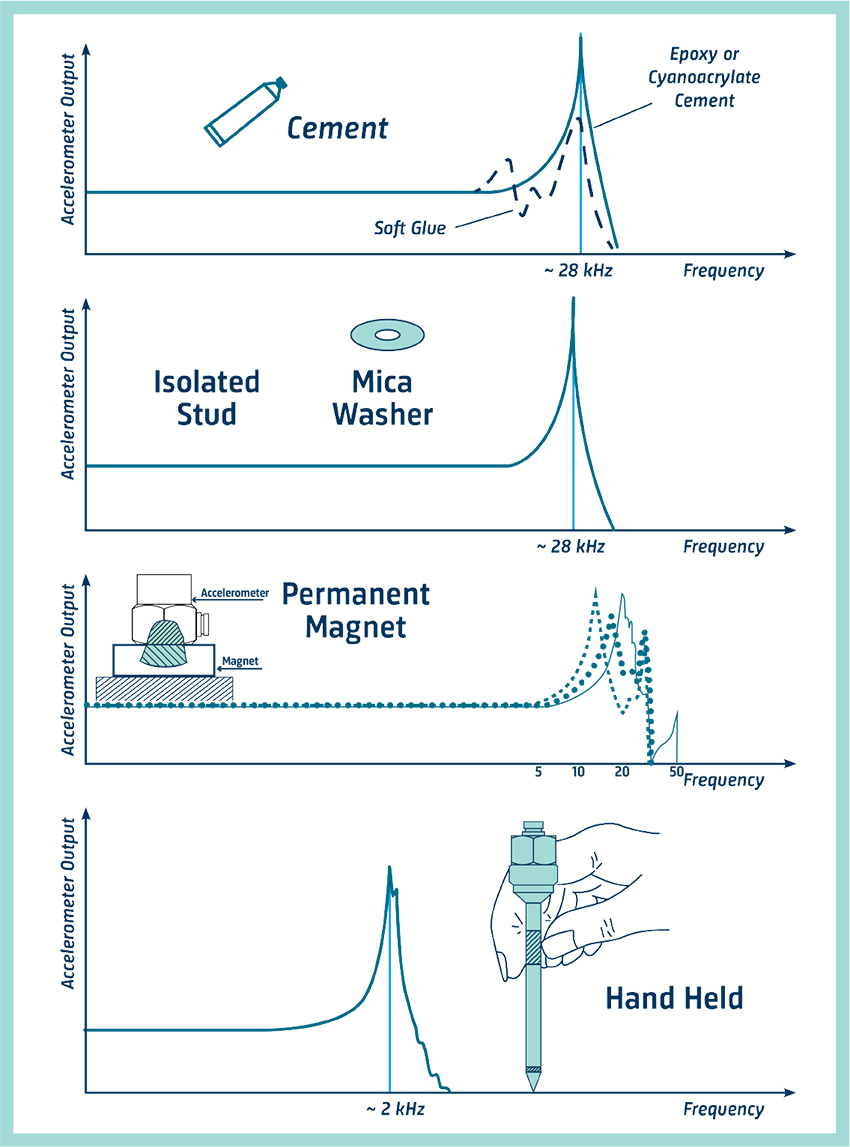 
A hand-held probe with the accelerometer mounted on top is very convenient for quick-look survey work but can give gross measuring errors because of the low overall stiffness.

Repeatable results cannot be expected. A low-pass filter should be used to limit the measuring range to about 1000 Hz.

Use the buttons below as we continue to the next chapter on environmental effects on measurements.