Beamforming is the ideal technique for sound-source location from medium to long measurement distances. Basically, the source location is performed by estimating the amplitudes of plane (or spherical) waves incident towards the array from a chosen set of directions.

Beamforming is often used to improve the spatial resolution, and it is well-suited for large objects such as vehicles in wind tunnels, where the array is placed relatively far from the source, outside the turbulent airflow. 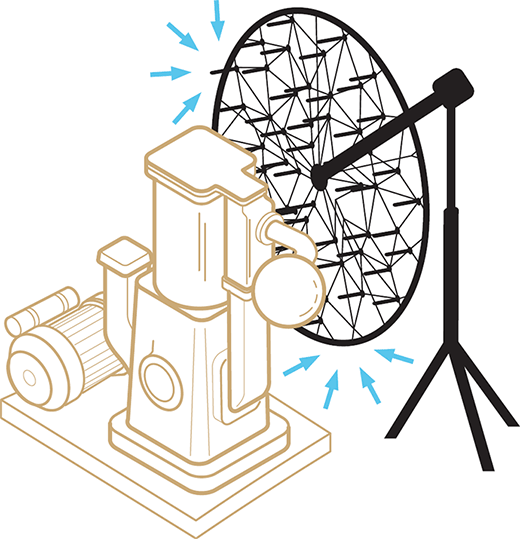 Beamforming is valid for medium to high frequencies (500 Hz to 20 kHz), and can be expanded with holography when used close to sources such as engines in a test cell.

Unlike what the above image indicates, beamforming does not require the array to be larger than the sound source. For typical, irregular array designs, the beamforming method does not allow the measurement distance to be much smaller than the array diameter. On the other hand, the measurement distance should be kept as small as possible to achieve the finest possible resolution on the source surface.

Beamforming provides an acoustical map of noise sources by using an array of microphones to detect the direction of arrival of sound from the sources. The number of microphones in the microphone array system can vary from 18 to 144, and with an integrated camera you are able to see simple and intuitive measurement information in real-time.

The patented wideband holography in the BrÃ¼el & KjÃ¦r beamforming system can be used to measure over a very wide frequency range. And with the addition of a transient option enables averaging in the domains of time, RPM and angle, making it ideal for powertrain analysis.

> Beamforming measurements on a superkart (Video)