Where can CAE be used?

CAE can bridge the gap between simulation data and real-world data and create synergy in any industry. The benefits of incorporating CAE become more pronounced in industries where the expense for design changes increases as they occur later in the product development process.

The automotive and aerospace industries are prime examples, where the cost of new prototype production can be overwhelming.

How does CAE benefit testing?

The incorporation of CAE data into product development offers engineers an opportunity to visually interact with the impacts of the design, and understand the effects of those changes.

Two-dimensional NVH data cannot always be as easily understood as a 3D model of a finished product interacting with a simulated real world. By linking the power of simulation with the test results, data can be more effectively communicated and more informed decisions can be made earlier in the process.

There is a reason the phrase âback to the drawing boardâ is dreaded. If the first tests are not performed until there are physical models and prototypes, there are any number of potential design quirks that could require new drawings, incurring a subsequent addition of cost in time and resources for new models or prototypes.

By reducing the number of prototypes and by linking CAE into the process, overhead build costs can be reduced and decisions made quicker and earlier in the process, avoiding late development-stage fixes that can be extraordinarily costly. 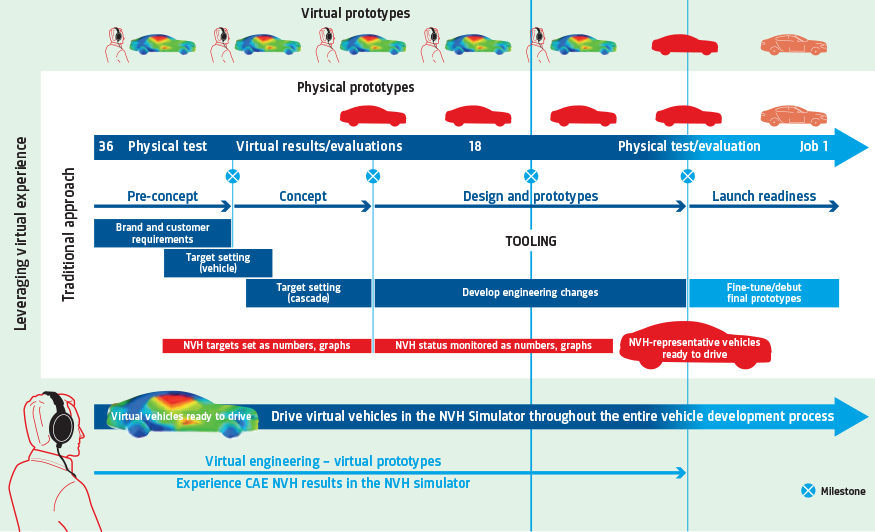 By leveraging CAEâs simulation capabilities and virtual tools, engineers can shift the NVH decision-making to earlier in the process