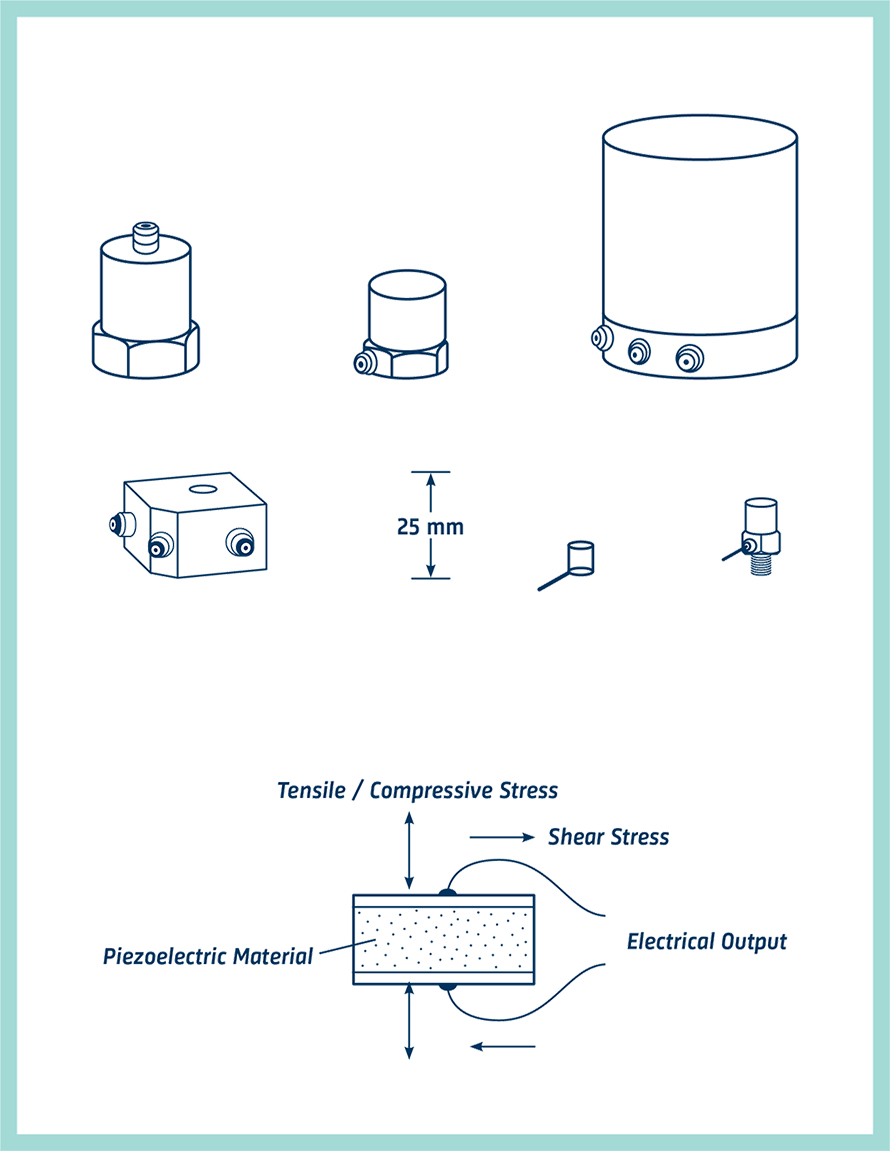 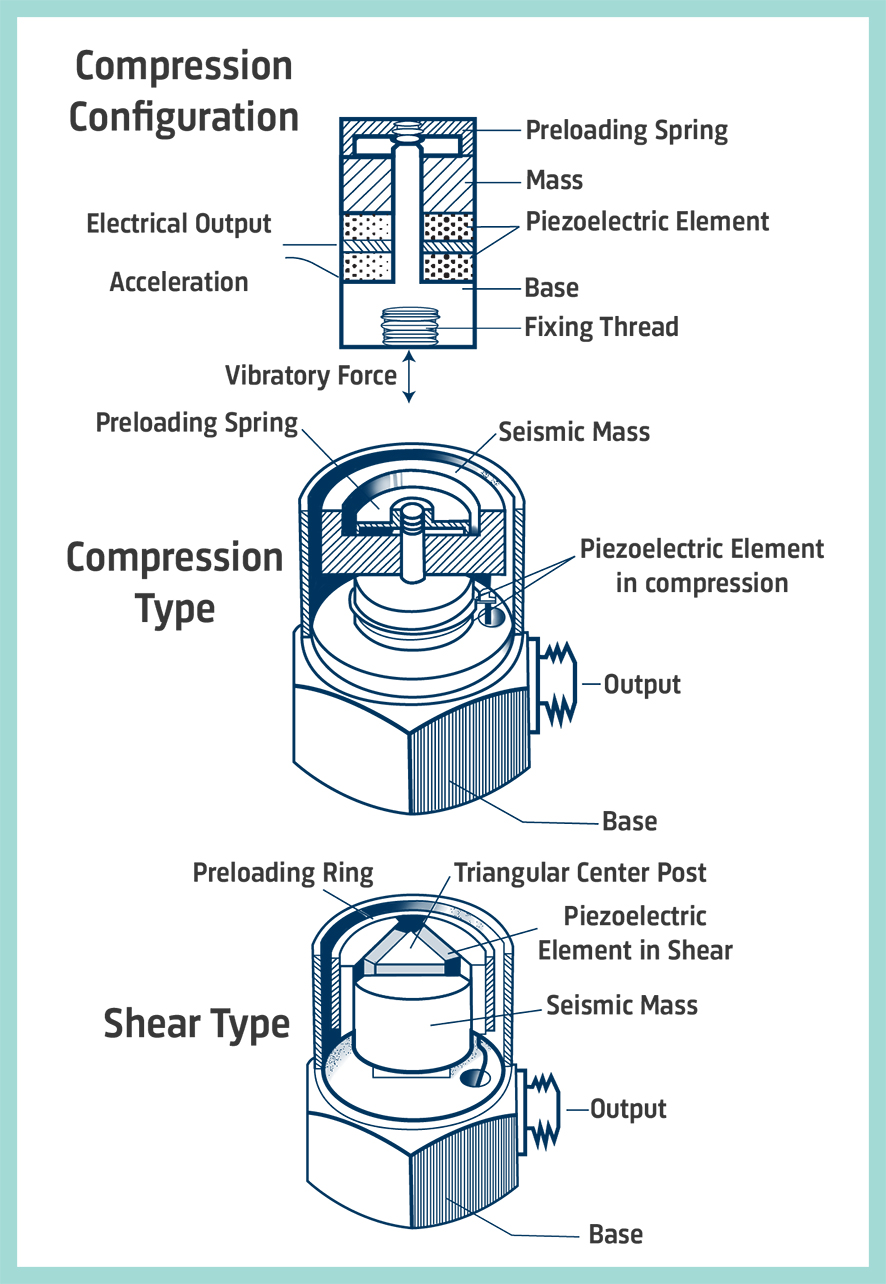 A number of different designs are used as shown in the figure below. 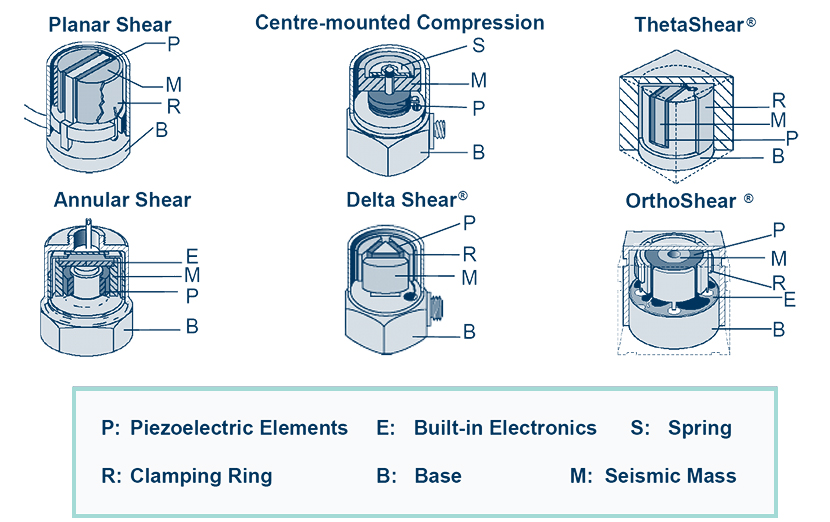 A small group of "general purpose" types will satisfy most needs. These are available with either top or side-mounted connectors and have sensitivities in the range from 1 to 10 mV or pC per m/s2. The Brüel & Kjær Uni-Gain® types have their sensitivity normalized to a convenient "round figure" such as 1 or 10 pC/ms-2 to simplify calibration of the measuring system.

CCLD (Constant Current Line Drive) or IEPE (Integrated Electronics Piezo Electric) accelerometers are piezoelectric accelerometers with integral preamplifiers, which give output signals in the form of voltage modulation on the power supply line.

These accelerometers are high-performance instruments that have higher output sensitivity than standard piezoelectric accelerometers (without integral amplifiers). They are hermetically sealed to protect against environmental contamination, have low susceptibility to radiofrequency and electromagnetic radiation, and low impedance output due to the external constant current power source. The low-impedance output allows you to use inexpensive coaxial cables.

Many of the accelerometers outside the general purpose range have their characteristics slanted towards a particular application. For example, small size accelerometers that are intended for high level or high-frequency measurements and use on delicate structures, panels, etc. and which weigh only 0,5 to 2 grams. 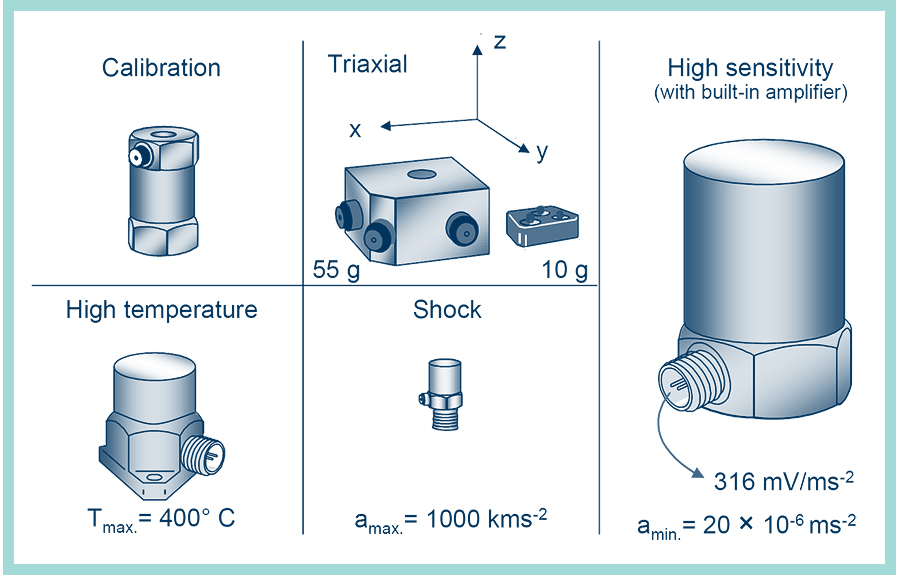 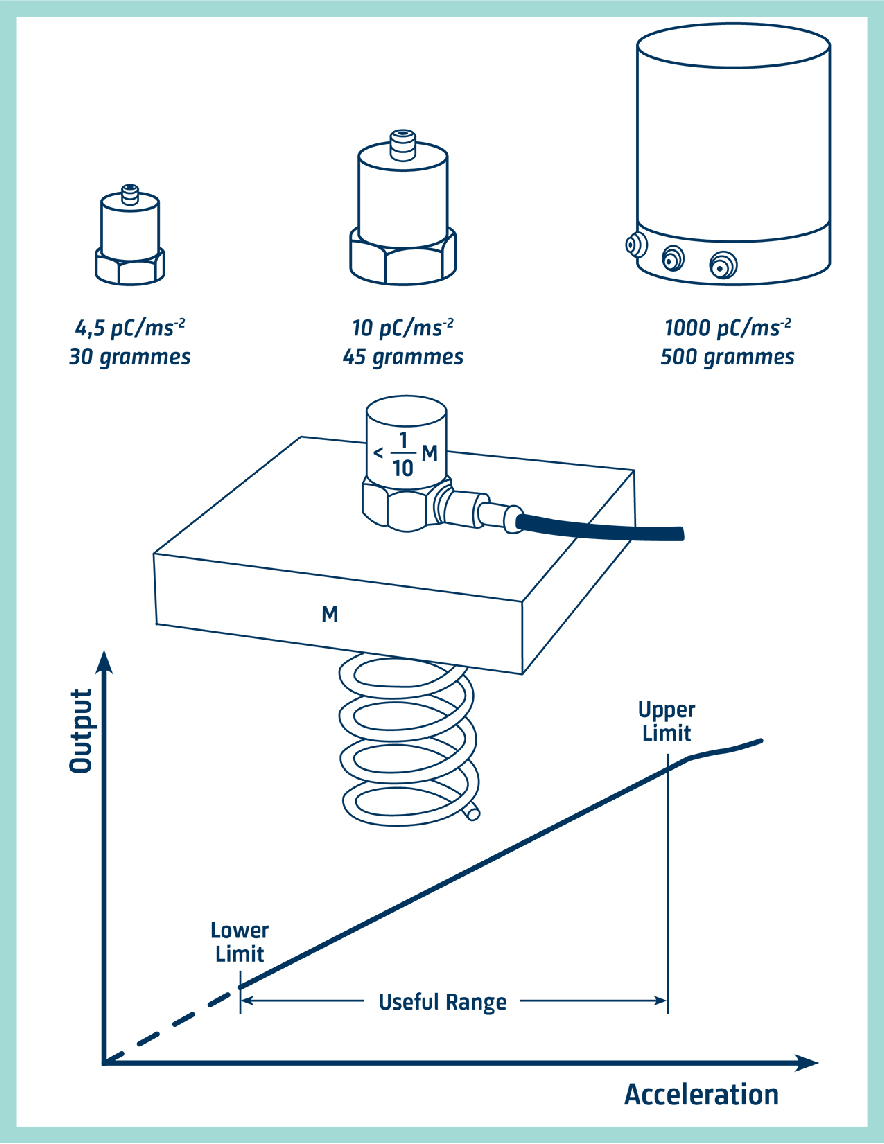 The frequency range over which the accelerometer gives a true output is limited at the low-frequency end in practice, by two factors. The first is the low-frequency cut-off of the amplifier which follows it. This is not normally a problem as the limit is usually well below one Hz. The second is the effect of ambient temperature fluctuations, to which the accelerometer is sensitive. With modern shear-type accelerometers, this effect is minimal, allowing measurements down to below 1 Hz for normal environments. 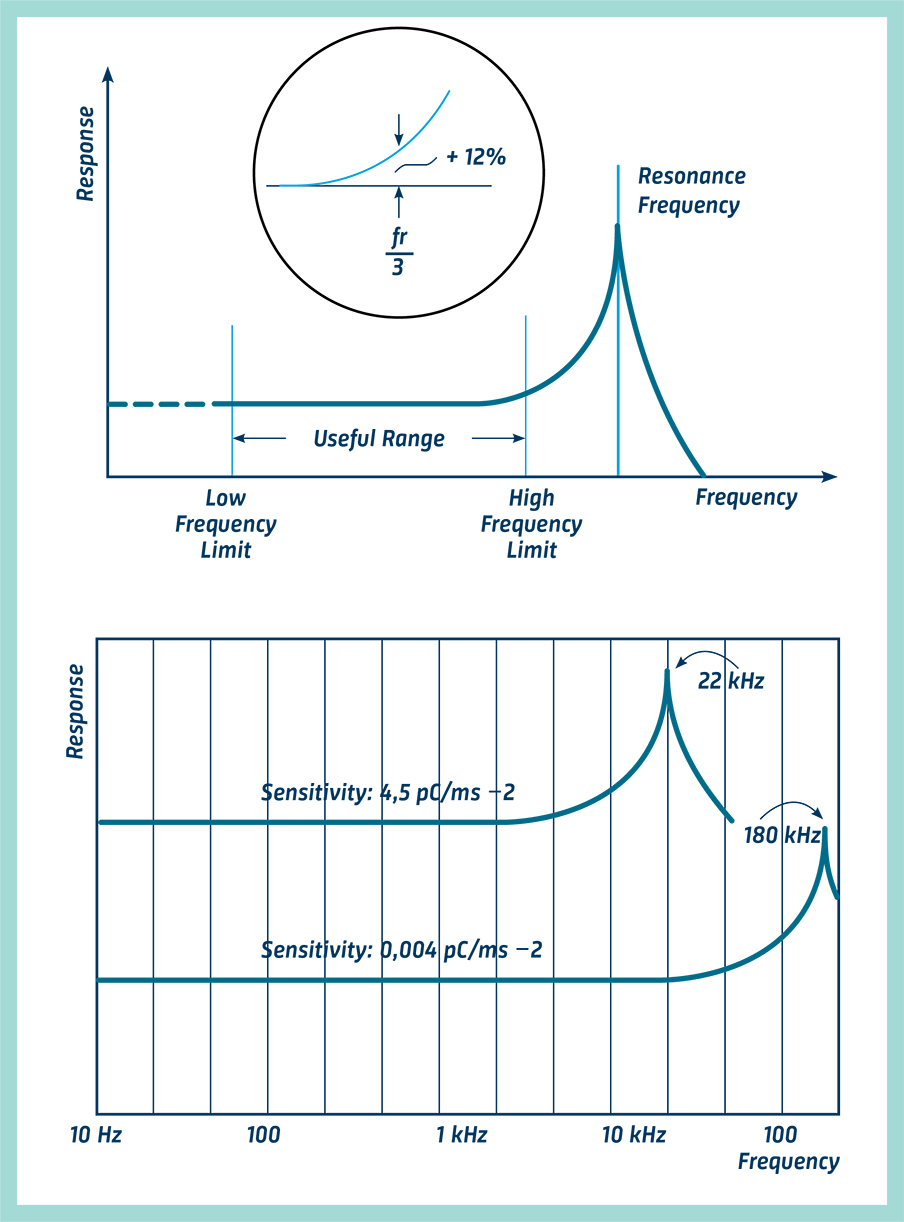 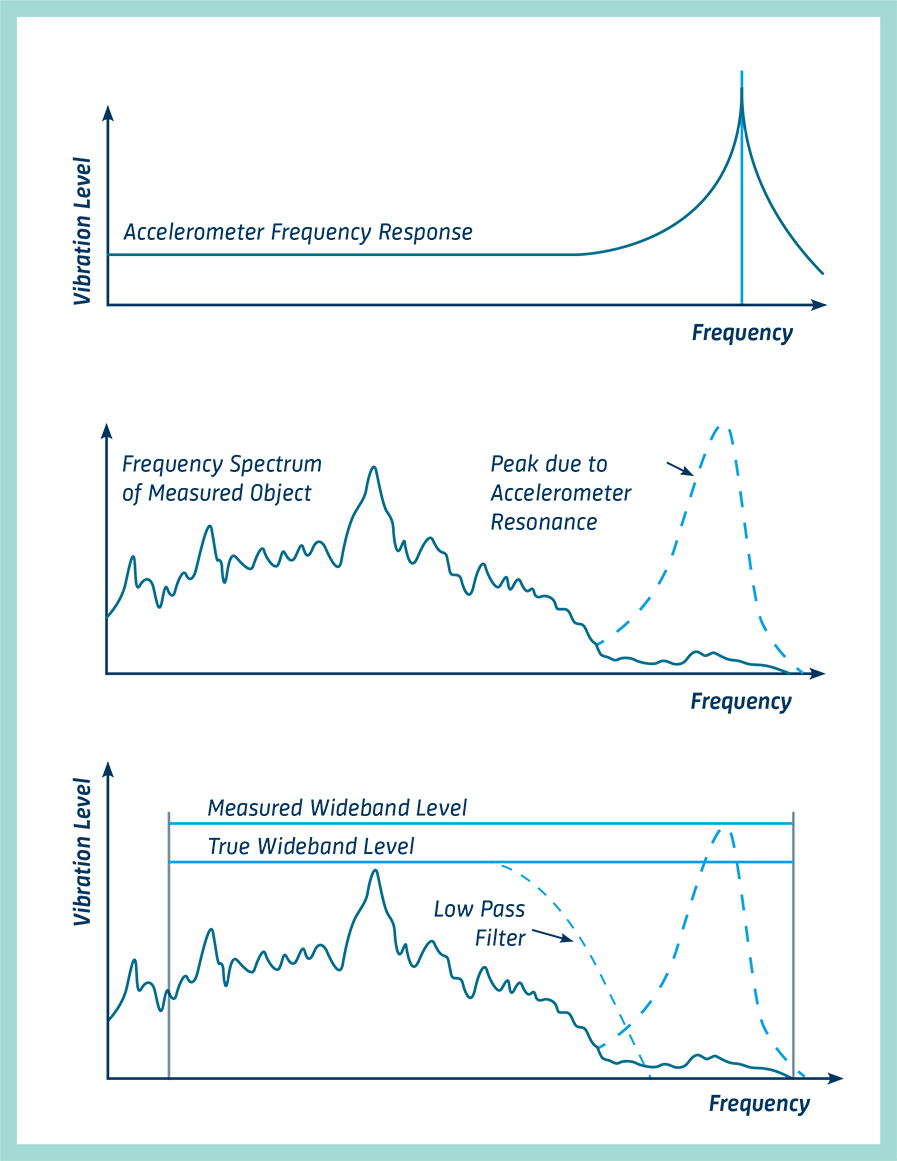