In our first article called "Anatomy Of The Human Ear", we used a simplified, stretched out depiction of the cochlea's inside, similar to the illustration in figure 1 to describe the interaction between the basilar membrane and the fluids in a the cochlear duct. The cochlea makes up the hearing part of the inner ear, and is situated two chambers, called...

The scala vestibuli and scala tympani are connected at the apex of the basilar membrane, forming a long, connected duct as shown in the figure below. However, this is only a simplified depiction of the cochlea, often used to focus on the interaction between fluid and basilar membrane motion. 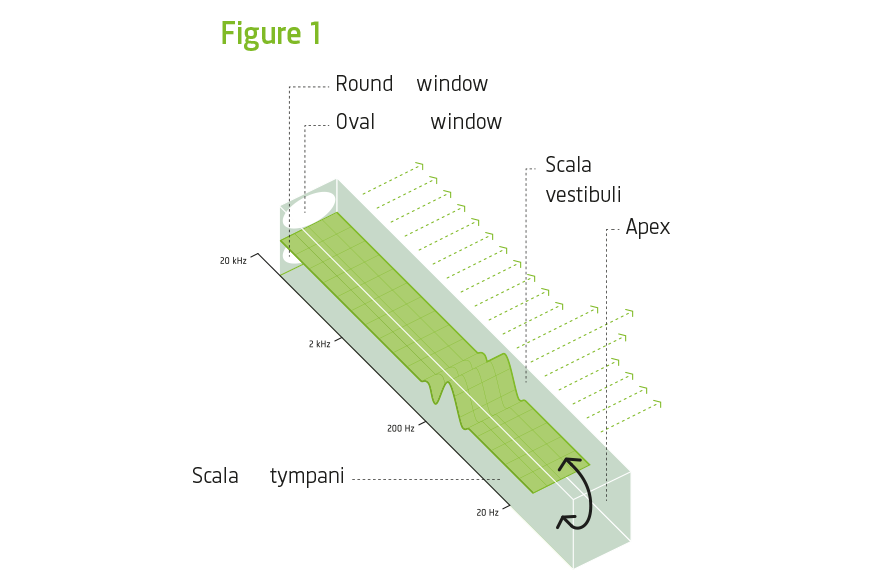 On top of the basilar membrane, is a complex structure called the organ of Corti. This is the actual transduction organism that converts motion to electrochemical pulses, which are then sent to the brain through the auditory nerve fibres. The organ’s top layer contains thousands of hair cells protruding into the endolymph. We differentiate between the inner and outer hair cells. 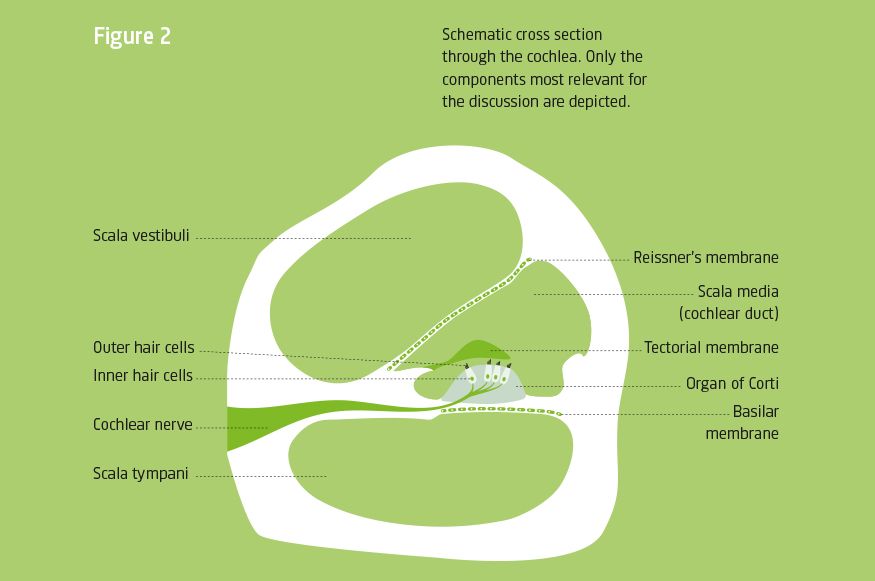 The inner hair cells convert mechanical motion into neurological signals (Figure 3). Think of them as tiny switches. While closed, the endolymph’s K+ are prevented from entering the hair cells. However, motion of the basilar membrane and endolymph will deflect the hairs relative to each other so that the tip links open the ion-channels, causing a K+ influx. This change in concentration opens another gate allowing an influx of calcium ions Ca++, which in turn triggers the actual pulse that is sent to the central nervous system. The ions are then quickly removed from the cells to achieve the default state of a low K+ and Ca++ concentration within the hair cells. 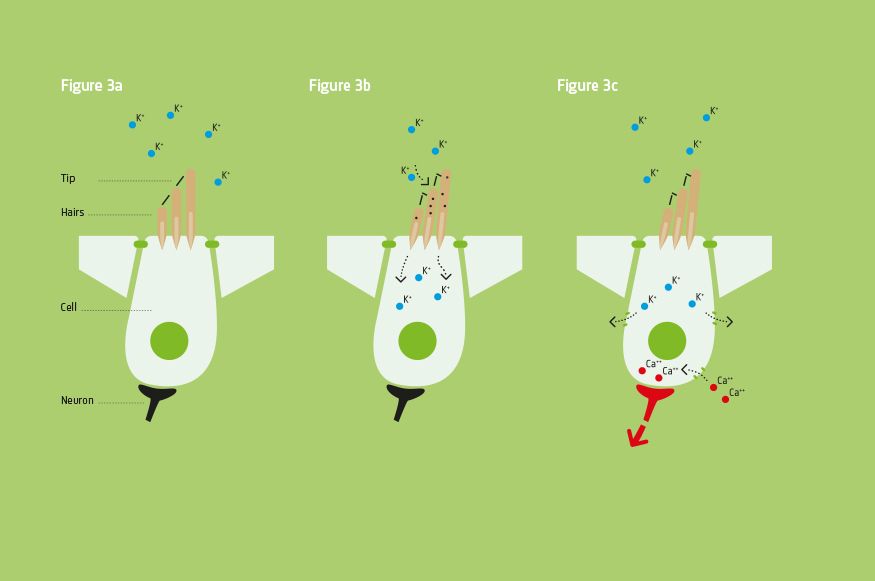 In part 1 of series, we showed that each section of the basilar membrane reacts most intensely to a particular frequency (Figure 1). Furthermore, each section is associated with a specific set of auditory nerve fibres, and the central nervous system identifies the frequency depending on the fibre delivering the impulse. In principle, a single pulse would be enough to announce a frequency, and indeed, there won’t be a pulse for each wave cycle (Figure 4). Instead, the number of impulses fired per second depends on the intensity of the sound – the more intense the sound the more impulses triggered.

As described in Figure 4, impulses will be time-locked to the phase information in the sound waves. This phase locking is most exact at lower frequencies, becoming less accurate at higher frequencies. This allows the auditory system to compare the timing between left and right ears (see Listening in 3D, Waves 8). Due to head shape and the distance between the ears, signals coming from the side are registered slightly earlier by one ear. In addition to comparing the arrival time of signal bursts, the auditory system has a directional clue for continuous sounds. 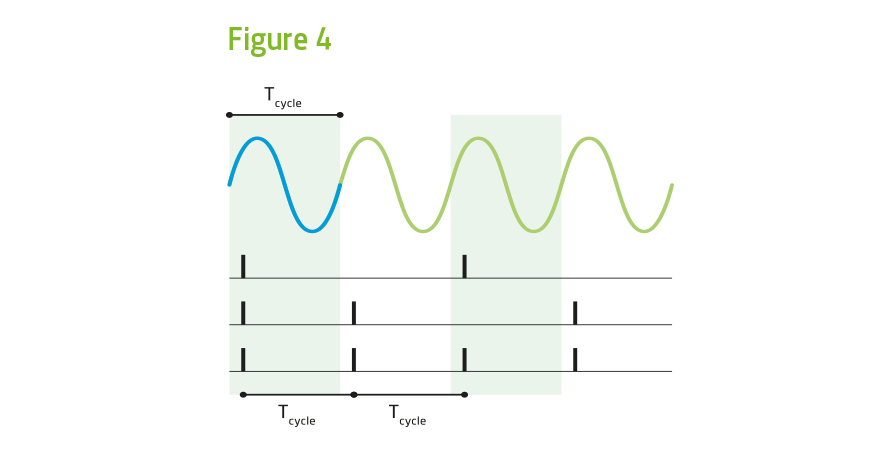 The outer hair cells do not participate in transduction. Instead, they are used to increase sensitivity. The cell walls contain a motor protein called prestin, which increases in volume when binding to an anion, in this case chloride anions (Cl–). Whenever hair-cell motion leads to a K+ influx, Cl– will be pulled from the prestin molecules, causing them to shrink in volume (Figure 5). When the K+ concentration is reduced again, the anions will reattach, and the molecules return to their expanded state. As a result, the entire cell will contract or expand, increasing the amplitude of the basilar membrane’s vibrations.

A schematic of the phase locking for impulses. The time between two successive impulses is for a full wave cycle (or multiple of it) in a tone, such that impulses are always fired at the same phase of a wave cycle, here shortly after the onset. 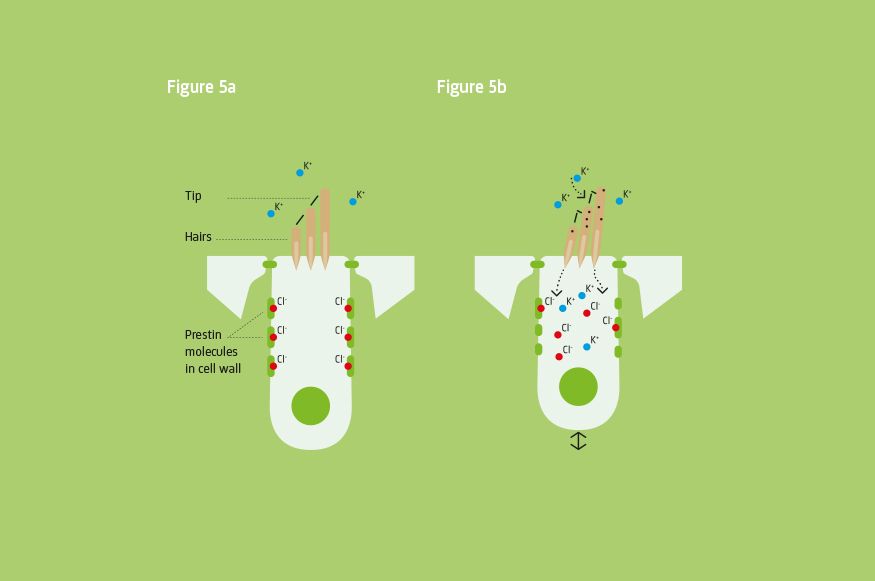 Why do we use three pages describing electrochemical processes? To show that our inner ear is a fragile apparatus that requires care. At birth, the human ear contains approximately 3500 inner and 12000 outer hair cells. Unfortunately, they cannot regenerate, which means that destruction of these cells will result in permanent hearing loss. While age and disease can be factors, one dominant cause of hearing loss (and one that can be largely avoided) is excessive exposure to noise.

Make sure to protect your ears from loud bangs and excessive noise at work and in your spare time.