This article covers some of the basic ideas and concepts relating to vibration control strategies for shaker vibration testing. It explains the need for control accelerometers and gives guidance on where to place them.

Nearly all vibration tests cover a frequency range where mechanical resonances occur in a system consisting of payload, fixture and armature. In this context, the test is controlled by acceleration, based on the following basic equation at constant mass:

However, under resonance conditions, the effective mass does not remain constant. Therefore, poor vibration control can lead to underloading or overloading of the payload and damage due to overdriving of the armature. Choosing where to place the control accelerometers is one of the most critical parts of any vibration test.

There are no universally suitable active vibration control positions. Nevertheless, the wrong positions can damage the vibration equipment or affect the accelerations applied to the payload. The following principles should therefore be observed:

The most obvious reason for control accelerometers is to limit the acceleration into the payload. If the payload is large and/or the frequency range is high, at some point one or more resonances will occur. This can be seen as the difference in acceleration levels over the fixture.

If only one accelerometer position is used in a test, the control loop ensures control of acceleration at that position only. If this position coincides with a resonance node where there is little or no motion, the rest of the structure can be accelerated by more than a hundred times the control value. 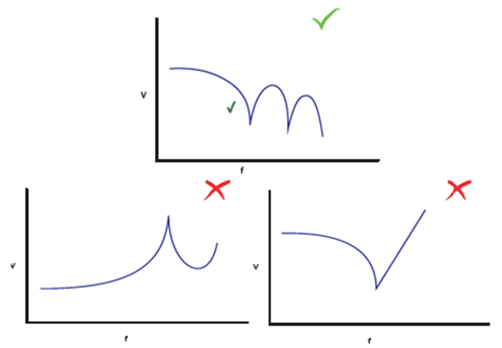 There is a difference between the control system of a shaker in sine and random testing.

The amplifier monitors the voltage and current supplied to the shaker, stopping the test if either exceeds the preset trip levels. In case of a high-level test, and if the control position is at a node, the drive power may increase above the trip level, causing the system to shut down.

A further complication is that, at the resonant frequency of the armature itself, there is a large amount of ‘free energy’. Little voltage and current is required to drive the armature at this frequency. It is possible to damage the armature by overdriving the shaker without causing amplifier shutdown. Placing a control accelerometer at the end of the system protects against this danger, since it moves in a similar way to the armature at the other end.

The Best Practice for Your Control Strategy

Following good practice as described below will maximize the life of the equipment:

This will protect the shaker from damage as much as possible. If these precautions are not taken, the shaker will be forced to deliver more than the intended force or acceleration levels, shortening its life.