It’s not only automobiles that are going electric—airplanes are as well! And, to prove that aircraft can be electrically powered, NASA has developed the X-57 Maxwell, its first all-electric X-plane. Ground Vibration Tests prove to be a key milestone for testing NASA’s X-57 Maxwell.

With the increase in electric-powered transportation, NASA wanted to prove that an aircraft could be electrically powered. NASA wanted the X-57 Maxwell to lower energy consumption, reduce emissions and lower the noise during flight. In addition to making sure that the design was energy efficient, they also had to ensure that the aircraft could fly safely.

NASA built a model of the aircraft to simulate the stresses that the aircraft would experience during a real flight using ground vibration testing or GVT. To gather data from the accelerometers around the motor, NASA used HBK’s LAN-XI data acquisition system and analyzer platform. HBK’s BK Connect software was then able to test and analyze data from 191 test runs with 14 different test configurations.

The GVT results showed that the pre-test airplane analytical model did not capture all the modes that were observed during the test. Updating the model to show these modes is going to be a challenge for the X-57 project team, but one result of the test is that they will have the necessary modal data to do it.

The X-57 airplane, currently in the Mod II configuration is a modified version of the Italian Tecnam P2006T. In place of the usual gasoline-powered motors, the X-57 has two all-electric motors powered by traction batteries. The X-57 Maxwell project has some lofty goals, including lower energy consumption (the X-57’s motors use one-fifth the energy of a gasoline-powered aircraft), reduced emissions, and lower noise during flight.

THE CHALLENGE: MAKING IT REAL

As NASA engineers design new electrically powered aircraft, they must ensure that their designs not only use energy efficiently but also that the aircraft can fly safely. One way they do this is to build an analytical model of the aircraft structure and simulate the stresses the aircraft will experience while in flight. By doing this, they can uncover weaknesses in their designs and fix them before making expensive prototypes.

There’s no substitute for physical ground testing, however. At some point, engineers must strap an airframe to a shaker and take some measurements. These physical tests are essential for validating the simulation models and the understanding of structural characteristics of any new aircraft design.

A ground vibration test, or GVT, is performed before the first test flight is made. During a GVT, test engineers subject the aircraft to a number of different vibration profiles while measuring the response at hundreds of points around the airframe. Analyzing these measurements help engineers identify the modal frequencies and mode shapes of the airplane in a flight-ready configuration. This, allows them to validate and update the aircraft’s finite element model (FEM), which they will then use for flutter analysis predictions. In the end, the flutter analysis tells them whether or not a structure has the necessary aeroelasticity and flutter margins necessary for airworthiness.

The test team was led by Natalie Spivey, NASA’s “ace” when it comes to aircraft structural dynamics airworthiness, modal testing, and flight flutter testing. Currently at NASA’s Armstrong Flight Research Center in Southern California, she holds a BS in Aerospace Engineering from Iowa State University (2000) and an MS in Mechanical Engineering from the University of California, Los Angeles (2006).

Because she has extensive experience with hands-on modal testing, airworthiness clearance, and flight testing control room experience, Spivey is seen by her colleagues as a valued engineer. She has supported numerous flight research programs as either a structural dynamics engineer or lead for programs including the X-53 Active Aeroelastic Wing, various F-15 and G-III flight experiments, Passive Aeroelastic Tailored Wing, and others in addition to the X-57 Maxwell.

She became interested in testing early in her career, spending a semester on a co-op assignment at NASA Dryden (which is now NASA Armstrong) between her junior and senior year in college, and part of her co-op experience was helping out with a couple of GVTs. What she likes about testing is that the work involves both analytical and hands-on tasks which Spivey excels at both. 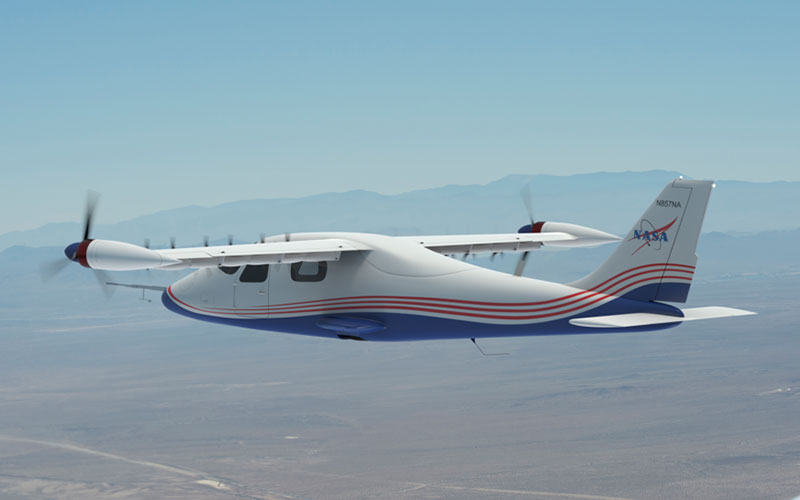 When running a GVT, it’s important that the test article be as close to the final design as possible. This can lead to some interesting challenges for the test team.

For example, during the GVT, the heavy and high voltage electric motor batteries were not real. In normal operation, sixteen traction battery modules power the twin electric motors and amount to nearly a third of the airplane’s total weight. To be safe, however, battery mass simulators were used instead of energized batteries. One challenge for the test team was to design and build simulators that have the same size, mass, and center of gravity as the actual batteries. They also had to be mounted to the fuselage in the same way as the actual batteries.

Another challenge was that two battery control modules (BCMs) were not ready in time for the GVT. To get around this problem, NASA engineers designed and built two BCM mockup units. The BCM mockup units were lighter than the actual units, so the engineers added shot bags to bring the weight up to the expected flight weights. Weight is a crucial factor for modal characteristics, so the test team had to track missing weight and ballast areas when needed.

The airplane configuration for the GVT contained power cables in the wing in addition to other flight instrumentation cables and sensors (flight accelerometers and strain gauges); all the components were installed before the airplane arrived at NASA Armstrong. The airplane weight (including all of the GVT locking devices, hardware, and ballast) was measured at 2,782 pounds prior to installing the GVT external accelerometers.

Because the objective of this GVT was to test two main boundary conditions, there were two different test setups. The first setup, called the “soft support” system, was designed to simulate a free-flight environment. It used bungee cords to suspend the airplane at underside airplane hard points. This was a real challenge because manufacturers do not normally measure the characteristics of bungee cords for use in these kinds of tests.

Prior to the GVT, NASA first performed numerous bungee characterization tests to ensure that the bungee cords selected could both handle the load and have a low enough frequency response to ensure separation from the first airplane modal frequency.

The second GVT setup was called the “on-tires setup.” For this test routine, the airplane had its landing wheels installed, and during the test, the aircraft rested on the ground. The tires were inflated to normal service pressures, and the airplane crew performed a shakedown of the airplane nose, tail, and wingtips to allow the struts to settle at equilibrium prior to testing. 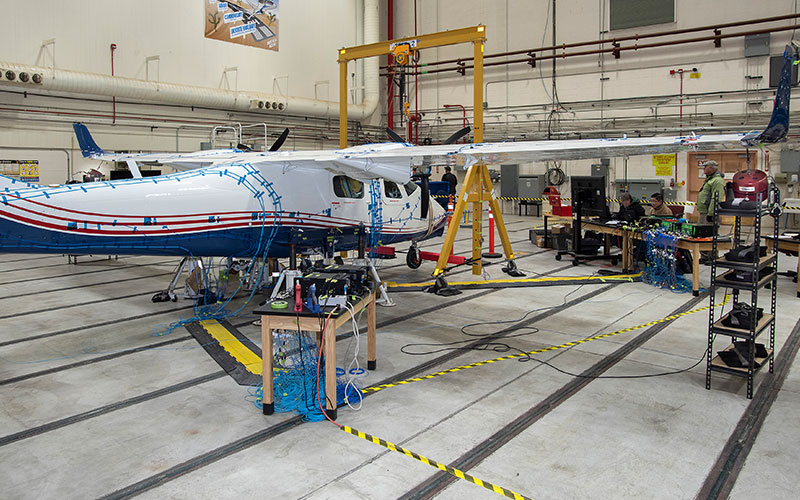 For the first test setup using the soft support system, also called the free-free setup, the team installed accelerometers at 127 different locations, which allowed them to measure 318 degrees of freedom (DOF). They distributed the accelerometers along both sides of the airplane fuselage, wing spars, control surfaces, motors and soft-support frames (located at the main landing gear and the fuselage nose) using the global coordinate system of the airplane. For the on-tires setup, they removed the accelerometers from the 14 locations on the soft-support system, leaving them with a total of 113 accelerometer locations, measuring 276 degrees of freedom.

To acquire data from these accelerometers, the NASA team used a 300+-channel LAN-XI data acquisition system from HBK. The LAN-XI is a modular data acquisition system and analyzer platform capable of acquiring sound and vibration data from more than 1,000 channels, with a wide dynamic input range, used in many demanding measurement applications. The NASA AFRC LAN-XI system included four mainframes, two LAN-XI 11-slot mainframes near the nose of the airplane, where the main GVT control station was located, and two LAN-XI 5-slot mainframes at the rear of the airplane. The mainframes were daisy-chained together via a network switch. 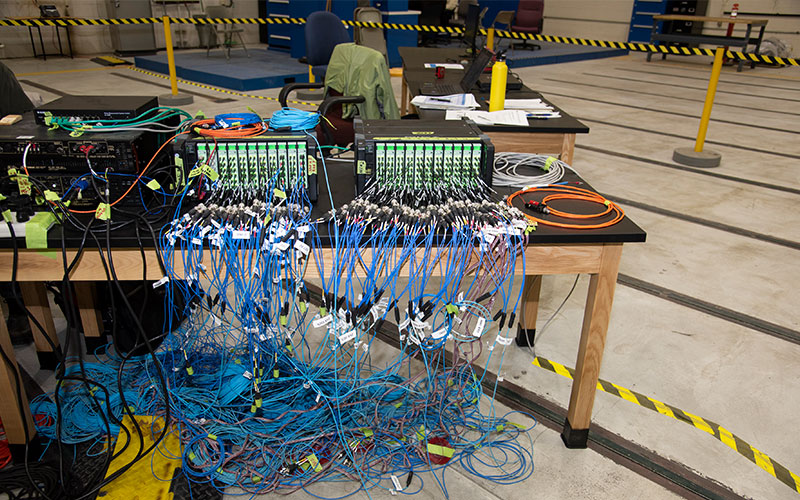 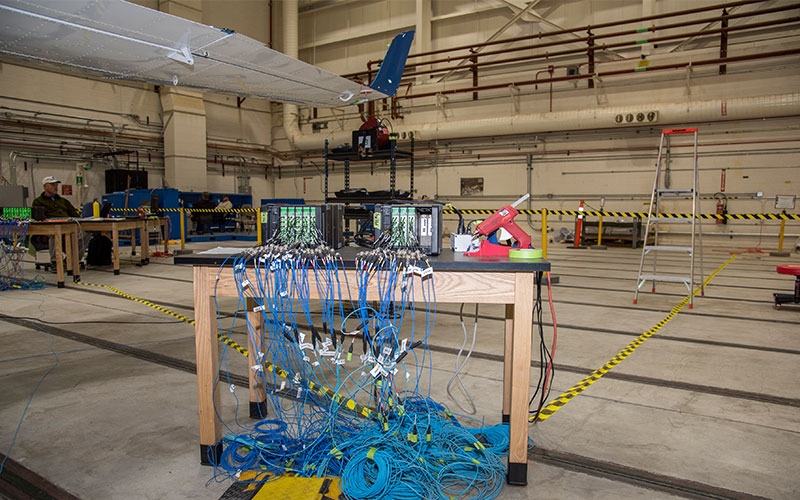 Table 1 details the test configuration matrix, including the target modes, excitation locations and directions, number of shakers, and which locking devices were used as constraints in either the cockpit or the control surfaces. Throughout the testing, the test engineers relied heavily on this configuration matrix to ensure both primary and secondary test objectives were achieved. When running these tests, they used either one or two shakers appropriately placed for the test. Shaker locations are typically determined by the FE model. 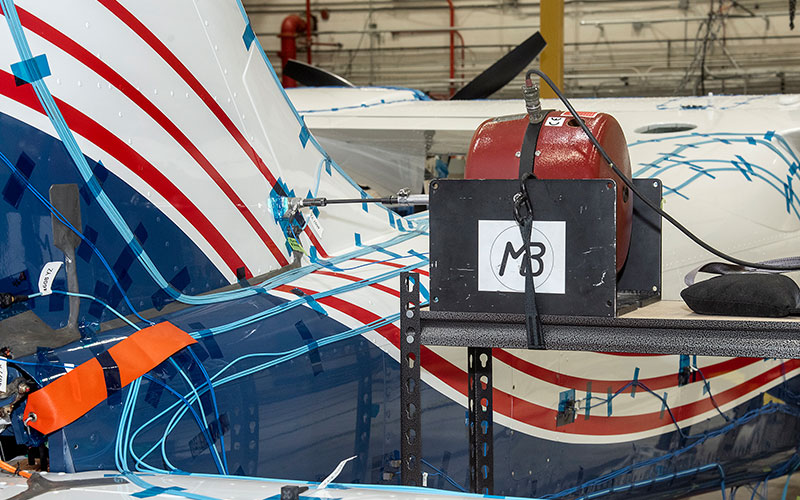 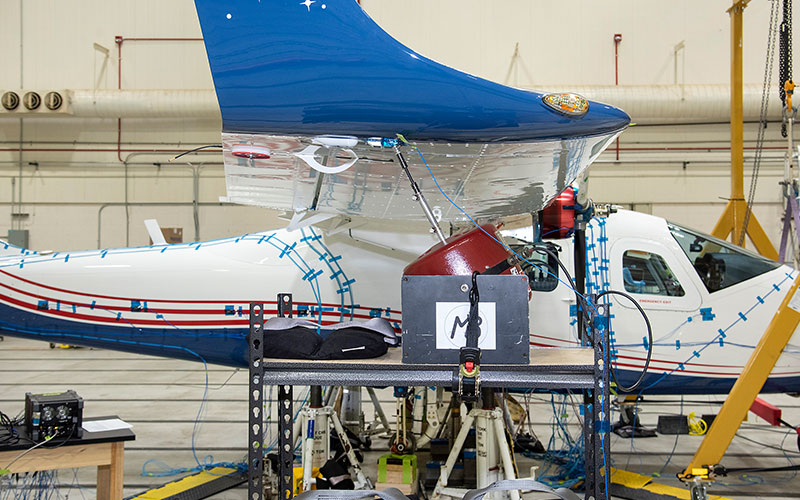 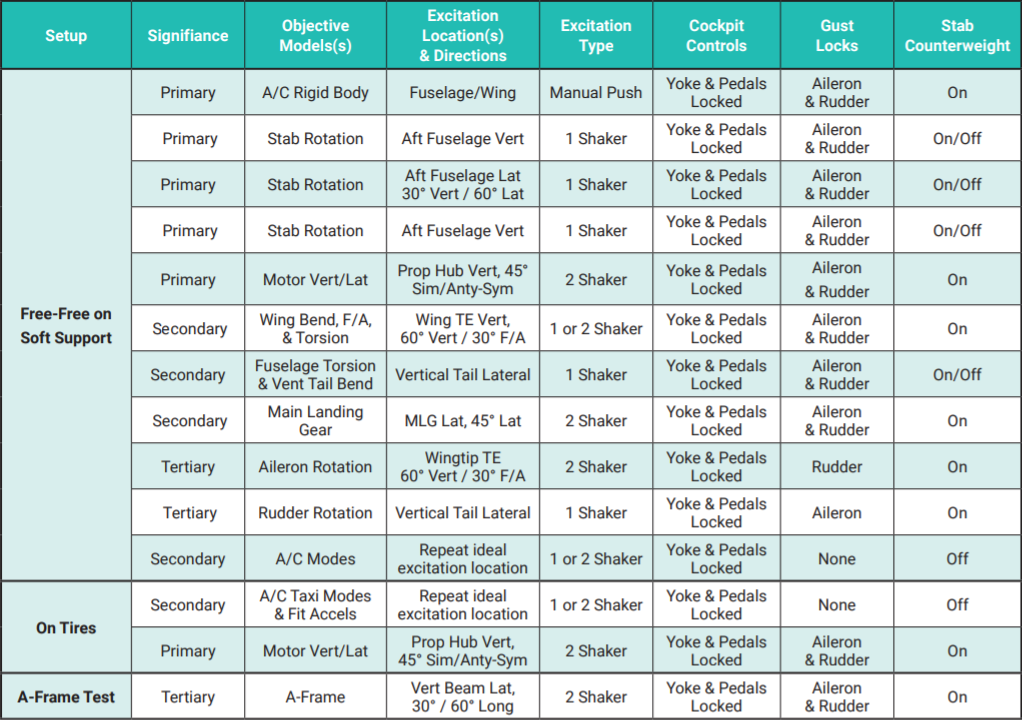 The GVT results showed many airplane modes that did not show up in the pre-test Mod II FEM modal results. These missing FEM modes identified during the GVT will assist with the post-test model updating and correlation process. For example, the test uncovered modes exhibited by coupled airplane motion, wing torsion and control surfaces. In addition, the pre-test model did not include some components, such as the nose boom. The GVT test data will allow the X-57 project team to accurately add these components to the post-test model. 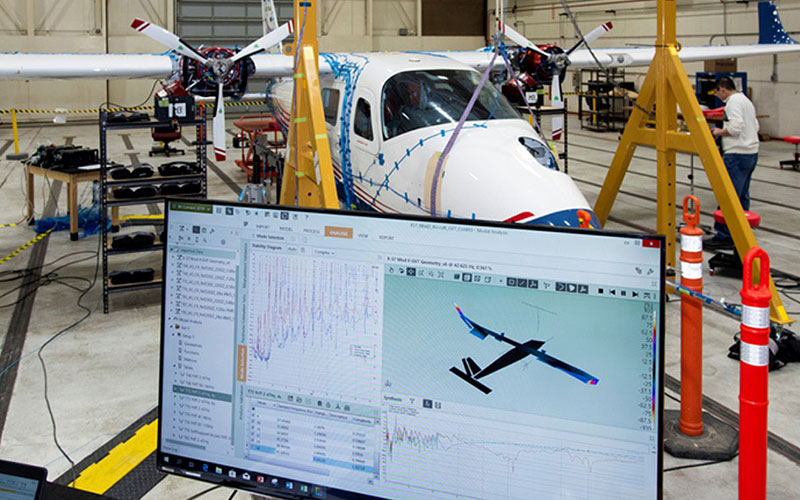 The GVT results gave NASA a much better understanding of the modal characteristics of the X-57 Mod II Maxwell configuration. The test showed that the pre-test airplane analytical model did not capture all the modes that were observed during the test. Updating the model to show these modes is going to be a challenge for the X-57 project team, but they now have the necessary modal test results to do it.

HBK provided support both before and during the GVT as one of the keys for success on this project. NASA engineers consulted with HBK before the test and throughout the duration of testing when an HBK application engineer was on-site to provide support.